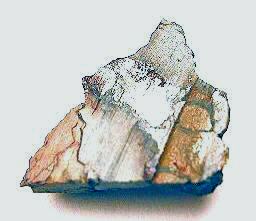 Large clasts of FeNi-metal constitute ~60 vol% of this bencubbinite, while the remainder is composed of olivineGroup of silicate minerals, (Mg,Fe)2SiO4, with the compositional endpoints of forsterite (Mg2SiO4) and fayalite (Fe2SiO4). Olivine is commonly found in all chondrites within both the matrix and chondrules, achondrites including most primitive achondrites and some evolved achondrites, in pallasites as large yellow-green crystals (brown when terrestrialized), in the silicate portion and pyroxeneA class of silicate (SiO3) minerals that form a solid solution between iron and magnesium and can contain up to 50% calcium. Pyroxenes are important rock forming minerals and critical to understanding igneous processes. For more detailed information, please read the Pyroxene Group article found in the Meteoritics & Classification category. silicates having barred to crytocrystalline textures. A plagioclaseAlso referred to as the plagioclase feldspar series. Plagioclase is a common rock-forming series of feldspar minerals containing a continuous solid solution of calcium and sodium: (Na1-x,Cax)(Alx+1,Si1-x)Si2O8 where x = 0 to 1. The Ca-rich end-member is called anorthite (pure anorthite has formula: CaAl2Si2O8) and the Na-rich end-member is albite mesostasisLast material to crystallize/solidify from a melt. Mesostasis can be found in both chondrules, in the matrix around chondrules, and in achondrites as interstitial fine-grained material such as plagioclase, and/or as glass between crystalline minerals.   is also present. The metalElement that readily forms cations and has metallic bonds; sometimes said to be similar to a cation in a cloud of electrons. The metals are one of the three groups of elements as distinguished by their ionization and bonding properties, along with the metalloids and nonmetals. A diagonal line drawn clasts are composed primarily of kamaciteMore common than taenite, both taenite and kamacite are Ni-Fe alloys found in iron meteorites. Kamacite, α-(Fe,Ni), contains 4-7.5 wt% Ni, and forms large body-centered cubic crystals that appear like broad bands or beam-like structures on the etched surface of a meteorite; its name is derived from the Greek word with very rare troiliteBrass colored non-magnetic mineral of iron sulfide, FeS, found in a variety of meteorites. inclusions, and they exhibit oriented, roughly hemispheric shapes, possibly the result of quenching upon contact with the asteroid surface while still in a plastic state (Perron and Leroux, 2004). The best current evidence supports an origin for these late-formed metal-rich carbonaceous chondritesChondrites are the most common meteorites accounting for ~84% of falls. Chondrites are comprised mostly of Fe- and Mg-bearing silicate minerals (found in both chondrules and fine grained matrix), reduced Fe/Ni metal (found in various states like large blebs, small grains and/or even chondrule rims), and various refractory inclusions (such in an impact plume generated by a collision between planetary embryos (Krot et al., 2009). Following condensation of the various components, they were aerodynamically sorted according to their velocity, size, and densityMass of an object divided by its volume. Density is a characteristic property of a substance (rock vs. ice, e.g.). Some substances (like gases) are easily compressible and have different densities depending on how much pressure is exerted upon them. The Sun is composed of compressible gases and is much as they spread out into the nebular gas in a typical fan-shaped pattern. It was calculated by Morris et al. (2012) that in ~1% of the impacts the host planetesimal would travel in the direction of the impact plume, sweeping up some of the aerodynamically sorted ejectaFractured and/or molten rocky debris thrown out of a crater during a meteorite impact event, or, alternatively, material, including ash, lapilli, and bombs, erupted from a volcano. within a short time period measured in weeks. They reason that this reaccreted material would have been mixed with existing crustal components to form a layer many meters thick. See the HaH 237 page for a more detailed scenario of the CB group formation process ascertained by Fedkin et al. (2015) through kinetic condensation modeling. An analysis of N, C, and H in NWA 1814 revealed that the highest N abundances are located within tetrataenite mostly associated with sulfides and carbides, with high concentrations occupying metal grain boundaries (Perron and Mostefaoui, 2007). The N, C, and H isotopic values are consistent with those of Bencubbin. The specimen of NWA 1814 shown above is a 1.02 g partial end section. The main massLargest fragment of a meteorite, typically at the time of recovery. Meteorites are commonly cut, sliced or sometimes broken thus reducing the size of the main mass and the resulting largest specimen is called the "largest known mass". is shown in the top photo below, while a 23.5 g cut section is shown at the bottom, courtesy of the J. Piatek Collection. 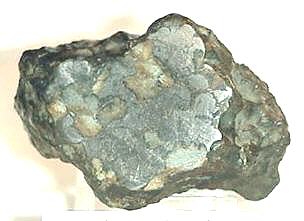 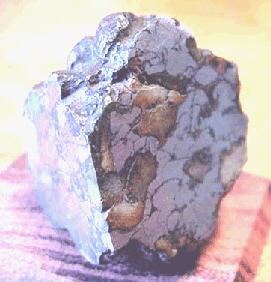