Found October 18, 1997
28° 36.56′ N., 13° 02.95′ E. A single mass of 3,173 g was found in the Libyan Sahara Desert in the fallMeteorite seen to fall. Such meteorites are usually collected soon after falling and are not affected by terrestrial weathering (Weathering = 0). Beginning in 2014 (date needs confirmation), the NomComm adopted the use of the terms "probable fall" and "confirmed fall" to provide better insight into the meteorite's history. If of 1997. This brecciaWork in Progress ... A rock that is a mechanical mixture of different minerals and/or rock fragments (clasts). A breccia may also be distinguished by the origin of its clasts: (monomict breccia: monogenetic or monolithologic, and polymict breccia: polygenetic or polylithologic). The proportions of these fragments within the unbrecciated material consists of a mechanical mixture of silicateThe most abundant group of minerals in Earth's crust, the structure of silicates are dominated by the silica tetrahedron, SiO44-, with metal ions occurring between tetrahedra). The mesodesmic bonds of the silicon tetrahedron allow extensive polymerization and silicates are classified according to the amount of linking that occurs between the and metalElement that readily forms cations and has metallic bonds; sometimes said to be similar to a cation in a cloud of electrons. The metals are one of the three groups of elements as distinguished by their ionization and bonding properties, along with the metalloids and nonmetals. A diagonal line drawn fragments that are similar to those in Bencubbin, but smaller in size. While the FeNi-metal abundance in HaH 237 is exceptionally high (>70 vol%), the opposite is true for the abundance of fine-grained matrixFine grained primary and silicate-rich material in chondrites that surrounds chondrules, refractory inclusions (like CAIs), breccia clasts and other constituents.. Compositionally and isotopically the bencubbinites are most similar to carbonaceous chondritesChondrites are the most common meteorites accounting for ~84% of falls. Chondrites are comprised mostly of Fe- and Mg-bearing silicate minerals (found in both chondrules and fine grained matrix), reduced Fe/Ni metal (found in various states like large blebs, small grains and/or even chondrule rims), and various refractory inclusions (such, thought to have formed in a vapor plume resulting from a collision between two CR-like parent bodies. 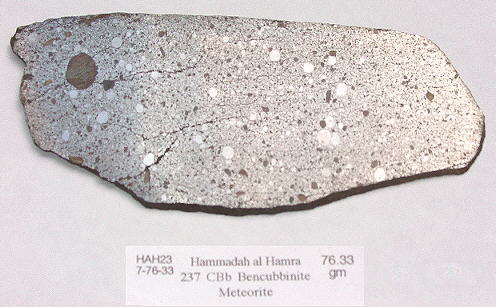 Specimen size ~ 123mm by 63mm
Photo courtesy of the J. Piatek Collection For additional information on the petrogenesis of HaH 237 and the CB chondrites, read the PSRD article by G. Jeffrey Taylor: ‘Little Chondrules and Giant Impacts‘, Oct 2005.