Found September 1981
45° 42′ N., 43° 42′ E. After cutting a field of grass located 36 km southeast of the settlement of Divnoe, in the Stavropol region of Russia, a single mass of 12.7 kg was found. The meteoriteWork in progress. A solid natural object reaching a planet’s surface from interplanetary space. Solid portion of a meteoroid that survives its fall to Earth, or some other body. Meteorites are classified as stony meteorites, iron meteorites, and stony-iron meteorites. These groups are further divided according to their mineralogy and had a rusty brown fusion crustMelted exterior of a meteorite that forms when it passes through Earth’s atmosphere. Friction with the air will raise a meteorite’s surface temperature upwards of  4800 K (8180 °F) and will melt (ablate) the surface minerals and flow backwards over the surface as shown in the Lafayette meteorite photograph below. indicating a significant terrestrial residence time. Divnoe is an olivine-rich (~70 vol%) achondrite with subchondritic chemistry and mineralogy. It contains an opaque-rich, fine-grained lithology (ORL) along with patches of pyroxeneA class of silicate (SiO3) minerals that form a solid solution between iron and magnesium and can contain up to 50% calcium. Pyroxenes are important rock forming minerals and critical to understanding igneous processes. For more detailed information, please read the Pyroxene Group article found in the Meteoritics & Classification category. and plagioclaseAlso referred to as the plagioclase feldspar series. Plagioclase is a common rock-forming series of feldspar minerals containing a continuous solid solution of calcium and sodium: (Na1-x,Cax)(Alx+1,Si1-x)Si2O8 where x = 0 to 1. The Ca-rich end-member is called anorthite (pure anorthite has formula: CaAl2Si2O8) and the Na-rich end-member is albite (PP), within a coarse-grained olivineGroup of silicate minerals, (Mg,Fe)2SiO4, with the compositional endpoints of forsterite (Mg2SiO4) and fayalite (Fe2SiO4). Olivine is commonly found in all chondrites within both the matrix and chondrules, achondrites including most primitive achondrites and some evolved achondrites, in pallasites as large yellow-green crystals (brown when terrestrialized), in the silicate portion groundmass (CGL). Veins of troiliteBrass colored non-magnetic mineral of iron sulfide, FeS, found in a variety of meteorites. and rare metalElement that readily forms cations and has metallic bonds; sometimes said to be similar to a cation in a cloud of electrons. The metals are one of the three groups of elements as distinguished by their ionization and bonding properties, along with the metalloids and nonmetals. A diagonal line drawn occur throughout. 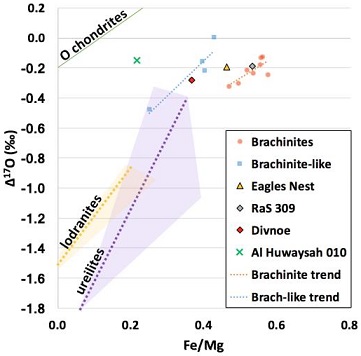 Diagram credit: Crossley et al., 49th LPSC, #2540 (2018) Recent advanced spectrographic techniques were applied to a set of 1,478 meteorite spectra and to members of the Eos family of asteroids, traditionally considered to be a good match to the CO/CV chondrites (Mothé-Diniz and Carvano, 2005). It was concluded that Divnoe was actually a much better, and very close spectral match to these asteroids, especially as compared to asteroids 221 Eos and 653 Berenike (see diagram below). Although the CRE age, or transport time, of the Divnoe meteorite to Earth of 17.2 m.y. is considerably less than that predicted for transport from the 9:4 resonance near the Eos family region (50 m.y. minimum; di Martino et al., 1997), a collisional cascade process could explain the discrepency. In support of this theory, the calculated inefficiency of the delivery process from the Eos region to Earth (~2%) might be considered commensurate with the rarity of the brachinites and brachinite-like meteorites in our collections. Furthermore, the breakup of the partially differentiated parent body of Divnoe would be expected to produce a highly diverse group of fragment lithologies, and this is exactly what is observed throughout the Eos family. The specimen of Divnoe shown above is a 0.19 g thin cut fragment.