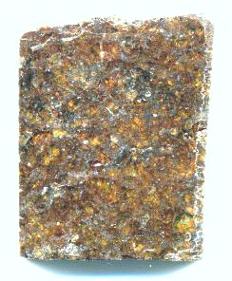 Found January 8, 2004
19° 45.4′ N., 54° 56.2′ W. A single complete stone weighing 1,063 g was found in Oman by Mike Farmer. Coincidentally, this achondriteAn achondrite is a type of stony meteorite whose precursor was of chondritic origin and experienced metamorphic and igneous processes. They have a planetary or differentiated asteroidal origin where the chondritic parent body reached a sufficient size that through heating due to radioactive decay of 26Al (aluminum isotope) and gravitational was found only ~30 m from an oriented chondriteChondrites are the most common meteorites accounting for ~84% of falls. Chondrites are comprised mostly of Fe- and Mg-bearing silicate minerals (found in both chondrules and fine grained matrix), reduced Fe/Ni metal (found in various states like large blebs, small grains and/or even chondrule rims), and various refractory inclusions (such. Analysis and classification was completed at Northern Arizona University (J. Wittke, T. Bunch), and Dhofar 979 was determined to be an olivine–pigeonite ureilite.

Dhofar 979 contains wormy graphiteOpaque form of carbon (C) found in some iron and ordinary chondrites and in ureilite meteorites. Each C atom is bonded to three others in a plane composed of fused hexagonal rings, just like those in aromatic hydrocarbons. The two known forms of graphite, α (hexagonal) and β (rhombohedral), have between grains and within olivineGroup of silicate minerals, (Mg,Fe)2SiO4, with the compositional endpoints of forsterite (Mg2SiO4) and fayalite (Fe2SiO4). Olivine is commonly found in all chondrites within both the matrix and chondrules, achondrites including most primitive achondrites and some evolved achondrites, in pallasites as large yellow-green crystals (brown when terrestrialized), in the silicate portion, and does not exhibit evidence of a significant degree of carbon–silicateThe most abundant group of minerals in Earth's crust, the structure of silicates are dominated by the silica tetrahedron, SiO44-, with metal ions occurring between tetrahedra). The mesodesmic bonds of the silicon tetrahedron allow extensive polymerization and silicates are classified according to the amount of linking that occurs between the reductionOxidation and reduction together are called redox (reduction and oxidation) and generally characterized by the transfer of electrons between chemical species, like molecules, atoms or ions, where one species undergoes oxidation, a loss of electrons,  while another species undergoes reduction, a gain of electrons. This transfer of electrons between reactants/smelting processes (FeO + C = Fe + CO) typically seen in other ureilites. Smelting is usually apparent as an increase in free Fe-metal content, a decrease in carbonElement commonly found in meteorites, it occurs in several structural forms (polymorphs). All polymorphs are shown to the left with * indicating that it been found in meteorites and impact structures: a. diamond*; b. graphite*; c. lonsdalite*; d. buckminsterfullerene* (C60); e. C540; f. C70; g. amorphous carbon; h. carbon nanotube*. content through loss of CO, and an increase in iron carbide content. Notably, this ureilite does not have the hardness observed in other ureilites. Dhofar 979 has a reduction value of R1, which could be consistent with either formation at great depth, where higher pressures inhibit the smelting reaction, or formation at lower temperatures. It was also shown that the pristine graphite in this ureilite has not been converted to diamondOne of the naturally occurring forms of carbon found in meteorites. Each C atom is bonded through covalent sp3 hydrid orbitals to four others. The strength of the C-C bonds makes diamond the hardest naturally occurring substance (according to the Mohs scale) in terms of resistance to scratching. There are, a transformation which typically occurs through impact shock forces while in proximity to the surface. A synopsis of current models for ureilite formation is presented on the Kenna page. The specimen of Dhofar 979 shown above is a 2.03 g partial slice. The photo below shows the complete Dhofar 979 mass in situ as found. 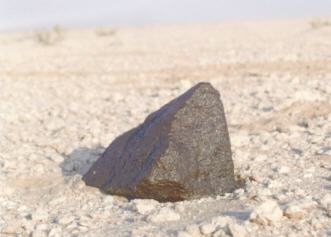 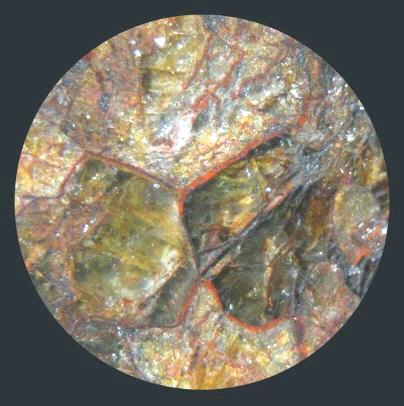 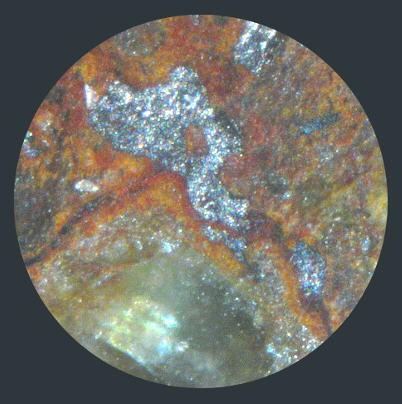 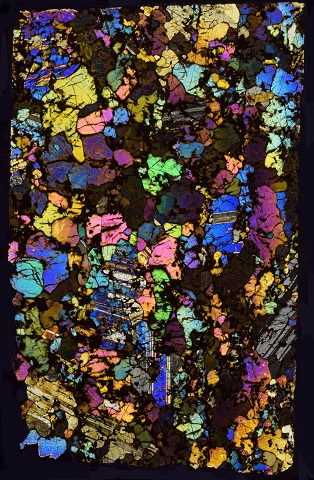