Lunar Feldspathic BrecciaWork in Progress ... A rock that is a mechanical mixture of different minerals and/or rock fragments (clasts). A breccia may also be distinguished by the origin of its clasts: (monomict breccia: monogenetic or monolithologic, and polymict breccia: polygenetic or polylithologic). The proportions of these fragments within the unbrecciated material
(impact-melt)

Found January 2003
19° 19.9′ N., 54° 47.0′ E. Nine individual stones, having a total combined weight of 245.46 g and exhibiting heterogeneous compositions, were recovered by a German expedition searching in Wadi Quitbit within the Dhofar dense collection area of Oman. The expedition was searching within the strewnfield in which the lunar pairing group of Dhofar 303, 305, 306, 307, 309, 310, 311, 730, 731, 489 (found 24 km away), 908, 909, 911 (comprising nine separate stones), 950, and 1085 was recovered. Terrestrial weathering has produced significant staining from hematiteFe-oxide mineral (Fe2O3) that may be the major cause of the red color on Mars. Coarser-grained gray hematite has the same chemical formula as the red variety, but a different crystalline structure. Deposits of gray hematite found in the Terra Meridiani region of Mars may suggest that water once circulated (R. Korotev). 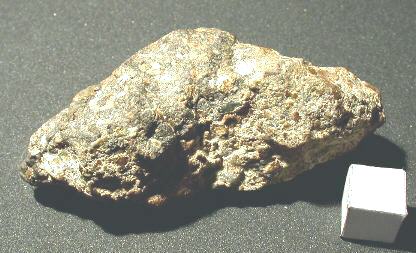 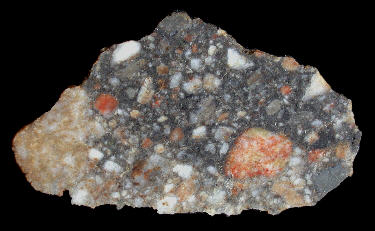