Primitive AchondriteAchondrite with an almost chondritic composition with age similar to the primordial chondrites. These should be better classified as "metachondrites"., ungroupedModifying term used to describe meteorites that are mineralogically and/or chemically unique and defy classification into the group or sub-group they most closely resemble. Some examples include Ungrouped Achondrite (achondrite-ung), Ungrouped Chondrite (chondrite-ung), Ungrouped Iron (iron-ung), and Ungrouped Carbonaceous (C-ung).
(possibly winonaite-related)

Found January 24, 2000
18° 23.2′ N., 54° 12.2′ E. A single stone weighing 116 g was found in the desert region of Dhofar, Oman. Analysis was conducted at the Vernadsky Institute, Moscow (Lorenz and Ivanova), and it was classified as an ungrouped primitive achondriteAn achondrite is a type of stony meteorite whose precursor was of chondritic origin and experienced metamorphic and igneous processes. They have a planetary or differentiated asteroidal origin where the chondritic parent body reached a sufficient size that through heating due to radioactive decay of 26Al (aluminum isotope) and gravitational. This is a highly metamorphosed, recrystallized, polymict brecciaGeneral term for all breccias that are neither monomict nor dimict. Modified from image source: http://www.saharamet.com/meteorite/gallery/HED/index.html., consisting of three separate lithologies within a pyroxene–plagioclaseAlso referred to as the plagioclase feldspar series. Plagioclase is a common rock-forming series of feldspar minerals containing a continuous solid solution of calcium and sodium: (Na1-x,Cax)(Alx+1,Si1-x)Si2O8 where x = 0 to 1. The Ca-rich end-member is called anorthite (pure anorthite has formula: CaAl2Si2O8) and the Na-rich end-member is albite matrixFine grained primary and silicate-rich material in chondrites that surrounds chondrules, refractory inclusions (like CAIs), breccia clasts and other constituents.:

Minor constituents include Ca-rich augiteHigh-Ca clinopyroxene, (Ca,Mg,Fe)SiO3, that occurs in many igneous rocks, particularly those of basaltic composition. In order to be considered augite, the clinopyroxene must contain 20 to 45 mol % of calcium (Wo20 - 45). An important and unique Martian meteorite is NWA 8159, that has been classified as an augite basalt., Cr-rich troiliteBrass colored non-magnetic mineral of iron sulfide, FeS, found in a variety of meteorites. (20 vol% in ol-rich lithology), chromiteBrownish-black oxide of chromium and iron (Cr-Fe oxide), Cr2FeO4, found in many meteorite groups. (pyx–plag lithology), and rare FeNi-metal. The modal content of the combined metallic component is only 0.3%, significantly less than the acapulcoitePrimitive achondrite that belongs to a small group named after the Acapulco meteorite that was observed to fall in Mexico in 1976. Acapulcoites are made mostly of fine-grained olivine (Fo3-14), orthopyroxene(En86-97), Ca-rich pyroxene (En51Wo44), plagioclase (An12-31), Ni-Fe metal, and troilite. They are transitional between primordial chondritic matter and more differentiated/lodranite clan and the winonaite–IAB iron complex meteorites. The Cr-enrichment of troilite suggests formation occurred in a more reducingOxidation and reduction together are called redox (reduction and oxidation) and generally characterized by the transfer of electrons between chemical species, like molecules, atoms or ions, where one species undergoes oxidation, a loss of electrons,  while another species undergoes reduction, a gain of electrons. This transfer of electrons between reactants environment than most other primitive achondrites. This meteoriteWork in progress. A solid natural object reaching a planet’s surface from interplanetary space. Solid portion of a meteoroid that survives its fall to Earth, or some other body. Meteorites are classified as stony meteorites, iron meteorites, and stony-iron meteorites. These groups are further divided according to their mineralogy and has been significantly weathered (W4) and shocked (S4).

The olivineGroup of silicate minerals, (Mg,Fe)2SiO4, with the compositional endpoints of forsterite (Mg2SiO4) and fayalite (Fe2SiO4). Olivine is commonly found in all chondrites within both the matrix and chondrules, achondrites including most primitive achondrites and some evolved achondrites, in pallasites as large yellow-green crystals (brown when terrestrialized), in the silicate portion and orthopyroxeneOrthorhombic, low-Ca pyroxene common in chondrites. Its compositional range runs from all Mg-rich enstatite, MgSiO3 to Fe-rich ferrosilite, FeSiO3. These end-members form an almost complete solid solution where Mg2+ substitutes for Fe2+ up to about 90 mol. % and Ca substitutes no more than ~5 mol. % (higher Ca2+ contents occur compositions of Dhofar 500 are similar to those of the winonaite–IAB iron complex meteorites, while the olivine also shows similarities to the ureilites (Lorenz et al., 2003). However, pyroxeneA class of silicate (SiO3) minerals that form a solid solution between iron and magnesium and can contain up to 50% calcium. Pyroxenes are important rock forming minerals and critical to understanding igneous processes. For more detailed information, please read the Pyroxene Group article found in the Meteoritics & Classification category. has a chemical composition that differs from other achondrites; i.e., it is more magnesian and higher in TiO2 than that of the acapulcoite/lodranite clan, ureilites, and brachinites. In addition, the Fe/Mn ratio in pyroxene is close to that of ordinary chondritesChondrites are the most common meteorites accounting for ~84% of falls. Chondrites are comprised mostly of Fe- and Mg-bearing silicate minerals (found in both chondrules and fine grained matrix), reduced Fe/Ni metal (found in various states like large blebs, small grains and/or even chondrule rims), and various refractory inclusions (such, but differs from that of the acapulcoite/lodranite clan and ureilites. Although Dhofar 500 has a high Cr content in troilite similar to that of ureilites, possibly a result of reductionOxidation and reduction together are called redox (reduction and oxidation) and generally characterized by the transfer of electrons between chemical species, like molecules, atoms or ions, where one species undergoes oxidation, a loss of electrons,  while another species undergoes reduction, a gain of electrons. This transfer of electrons between reactants processes, its higher plagioclase content and more limited silicateThe most abundant group of minerals in Earth's crust, the structure of silicates are dominated by the silica tetrahedron, SiO44-, with metal ions occurring between tetrahedra). The mesodesmic bonds of the silicon tetrahedron allow extensive polymerization and silicates are classified according to the amount of linking that occurs between the compositional range distinguish it from ureilites. OxygenElement that makes up 20.95 vol. % of the Earth's atmosphere at ground level, 89 wt. % of seawater and 46.6 wt. % (94 vol. %) of Earth's crust. It appears to be the third most abundant element in the universe (after H and He), but has an abundance only isotopeOne of two or more atoms with the same atomic number (Z), but different mass (A). For example, hydrogen has three isotopes: 1H, 2H (deuterium), and 3H (tritium). Different isotopes of a given element have different numbers of neutrons in the nucleus. studies have determined that Dhofar 500 does not plot among any of the known meteorite groups; however, it does plot along an extension of the trend line of the silicate component of the winonaite–IAB iron complex meteorites (see diagram below), and also near the trend line of the ureilites. Notably, Dhofar 500 has olivine and troilite compositions that are similar to those of polymict ureilites, but without a carbon-rich matrix. 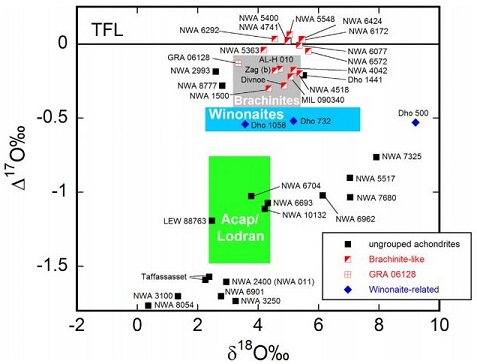 Diagram credit: Greenwood et al., Chemie der Erde, vol. 77, p. 23 (2017)
‘Melting and differentiationA process by which a generally homogeneous chondritic body containing mostly metal, silicates and sulfides will melt and form distinct (differentiated) layers of different densities.   When the melting process continues for a long enough period of time, the once chondritic body will re-partition into layers of different composition including of early-formed asteroids: The perspective from high precision oxygen isotope studies’
(open access: http://dx.doi.org/10.1016/j.chemer.2016.09.005) The Ar–Ar age calculations for Dhofar 500 reflect a complex history with ages of 4.454 (±0.011) b.y. and 4.307 (±0.011) b.y., consistent with the range of ages for winonaites and silicates from IAB complex irons and some ordinary chondrites (Korochantseva et al., 2011). Another partial degassing event is indicated with an age younger than 3.2 b.y. The photo of Dhofar 500 shown above is a 0.43 g slice with fusion crustMelted exterior of a meteorite that forms when it passes through Earth’s atmosphere. Friction with the air will raise a meteorite’s surface temperature upwards of  4800 K (8180 °F) and will melt (ablate) the surface minerals and flow backwards over the surface as shown in the Lafayette meteorite photograph below.. The photo below shows an in situ view. 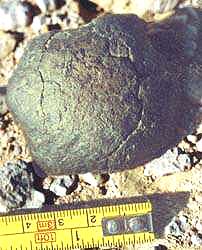 Photo courtesy of the CometConglomeration of frozen water and gases (methane, ammonia, CO2) and silicates that that formed in the outer solar system and orbits the Sun. In recent years, the description of comets has shifted from dirty snowballs to snowy dirtballs with more dust than ice. However, the ratio is less than 10-to-1. Meteorite Shop