CM-anom or ung
Possible ‘CY’ ChondriteChondrites are the most common meteorites accounting for ~84% of falls. Chondrites are comprised mostly of Fe- and Mg-bearing silicate minerals (found in both chondrules and fine grained matrix), reduced Fe/Ni metal (found in various states like large blebs, small grains and/or even chondrule rims), and various refractory inclusions (such
(thermally metamorphosed/dehydrated) 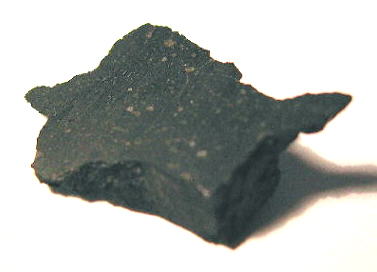 Found January 15, 2001
18° 21.6′ N., 54° 11.3′ E. A fresh, black, carbonaceous chondriteCarbonaceous chondrites represent the most primitive rock samples of our solar system. This rare (less than 5% of all meteorite falls) class of meteorites are a time capsule from the earliest days in the formation of our solar system. They are divided into the following compositional groups that, other than weighing just 90 g was found in the desert of Oman. Dhofar 225 has textural characteristics similar to typical CM chondritesChondrites are the most common meteorites accounting for ~84% of falls. Chondrites are comprised mostly of Fe- and Mg-bearing silicate minerals (found in both chondrules and fine grained matrix), reduced Fe/Ni metal (found in various states like large blebs, small grains and/or even chondrule rims), and various refractory inclusions (such, but differs from members of that group in mineralogy, bulk composition, and O-isotopic composition (Ivanova et al., 2010). The chromium oxide content of Dhofar 225 indicates a petrologic typeMeasure of the degree of aqueous alteration (Types 1 and 2) and thermal metamorphism (Types 3-6) experienced by a chondritic meteorite. Type 3 chondrites are further subdivided into 3.0 through 3.9 subtypes. below 3.0.

Dhofar 225 has an O-isotopic composition that is enriched in heavy oxygenElement that makes up 20.95 vol. % of the Earth's atmosphere at ground level, 89 wt. % of seawater and 46.6 wt. % (94 vol. %) of Earth's crust. It appears to be the third most abundant element in the universe (after H and He), but has an abundance only (18O, 17O), and has a plot very close to the C2-ungrouped Tagish Lake (oxygen isotopeOne of two or more atoms with the same atomic number (Z), but different mass (A). For example, hydrogen has three isotopes: 1H, 2H (deuterium), and 3H (tritium). Different isotopes of a given element have different numbers of neutrons in the nucleus. plot) and to the CM/CI-like, thermally metamorphosed/dehydrated Antarctic meteoriteWork in progress. A solid natural object reaching a planet’s surface from interplanetary space. Solid portion of a meteoroid that survives its fall to Earth, or some other body. Meteorites are classified as stony meteorites, iron meteorites, and stony-iron meteorites. These groups are further divided according to their mineralogy and grouplet termed ‘CY’ by Y. Ikeda (1992 [Consortium Summary]) which consists of Belgica 7904 (C2-ung), Y-82162 (C1/2-ung), and Y-86720 (C2-ung) (see MetBull oxygen isotope plot, and diagram below). 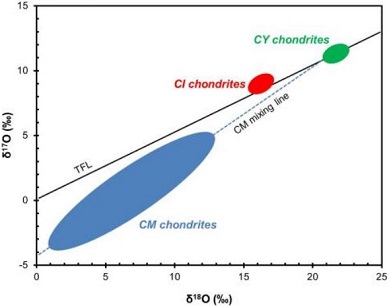 Diagram credit: King and Russell, 50th LPSC, #1386 (2019) Other possibly related dehydrated CM-like meteorites include Y-86789 (C2-ung, likely paired with Y-86720), WIS 91600 (CM2), EET 96010 (CM2), PCA 02012 (CM2). In addition, two meteorites classified as CI, Y-86029 and Y-980115, were determined by King and Russell (2019) to have similar mineralogical and chemical similarities to the CY group. In addition, Nakamura (2006) identified two regolithMixture of unconsolidated rocky fragments, soil, dust and other fine granular particles blanketing the surface of a body lacking an atmosphere. Regolith is the product of "gardening" by repeated meteorite impacts, and thermal processes (such as repeated heating and cooling cycles).   breccias containing solar-wind-implanted noble gasesElement occurring in the right-most column of the periodic table; also called "inert" gases. In these gases, the outer electron shell is completely filled, making them very unreactive. which belong to this dehydrated group, Y-793321 (CM2) and A-881458 (CM2), while M.M.M. Meier (2014) found that the meteorite Diepenveen (CM2-an) also contains similar trapped solar gases. Another ungroupedModifying term used to describe meteorites that are mineralogically and/or chemically unique and defy classification into the group or sub-group they most closely resemble. Some examples include Ungrouped Achondrite (achondrite-ung), Ungrouped Chondrite (chondrite-ung), Ungrouped Iron (iron-ung), and Ungrouped Carbonaceous (C-ung). C2 meteorite with a similar O-isotopic composition is Dhofar 1988 (oxygen isotope plot; photo [courtesy of Marcin Cimala]), which was found by M. Cimala in 2011. In addition, the ungrouped C chondrite Dhofar 2066 also has a heavy oxygen isotope composition similar to the CY group (oxygen isotope plot) as do Y-86737 and Y-980134 which are both classified as CI1 (King and Russell, 2019). Notably, Dhofar 225 has many features and an oxygen isotopic composition similar to the anomalous CM chondriteClass of carbonaceous chondrites named after the Mighei meteorite that fell in Ukraine in 1889. They represent samples of incompletely serpentinized primitive asteroids and have experience extremely complex histories. CM meteorites are generally petrologic level type 2 though a few examples of CM1 and CM1/2 also exist. Compared to CI Dhofar 735 (oxygen isotope plot; photo), which along with Belgica 7904 and PCA 02012, have experienced the highest temperatures (~900°C) over a brief time interval (PCA 02012 estimated at tens of hours; Nakato et al., 2013) compared to other members belonging to the CY group. The case for a distinct CY group as proposed by Y. Ikeda (1992) is strengthened by a mineralogical comparison conducted by King and Russell (2019). The significantly higher modal sulfide content in the CY-group chondrites Y-980115 and Y-82162 compared to that of average CM and CI chondrites is difficult to reconcile with an attribution to hydrationReaction of a substance with water./dehydration processes, but is instead more consistent with a difference in primary mineralogy (see diagram below). 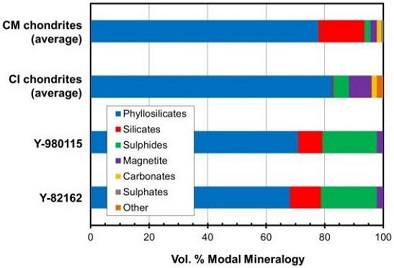 Diagram credit: King and Russell, 50th LPSC, #1386 (2019) Differences exist between Dhofar 225 and Dhofar 735 on one hand, and the Belgica-like grouplet on the other. In contrast to the FeNi-metal grains present among Belgica-like meteorites, those in Dhofar 225 and Dhofar 735 are not enriched in Cr and P (Ivanova et al., 2010). Moreover, the bulk chemistry between the Dhofar and Belgica metamorphosed meteorites are different. Similar to the Belgica grouplet, but unlike typical CM chondrites, Dhofar 225 exhibits considerable but incomplete dehydration of matrixFine grained primary and silicate-rich material in chondrites that surrounds chondrules, refractory inclusions (like CAIs), breccia clasts and other constituents. phyllosilicatesClass of hydroxyl-bearing silicate minerals with a sheet-like structure. They result from aqueous alteration are dominantly serpentine and smectite in meteorites; found in the matrixes of carbonaceous chondrites. Phyllosilicates consist of repeating sequences of sheets of linked tetrahedra (T) and sheets of linked octahedra (O). The T sheet consists of (<2 wt% water), Fe and S depletions, and contains tiny grains of tetrataenite within the matrix—all features consistent with a higher thermal metamorphism than that experienced by typical CM group members. However, sharp zoning profiles of olivineGroup of silicate minerals, (Mg,Fe)2SiO4, with the compositional endpoints of forsterite (Mg2SiO4) and fayalite (Fe2SiO4). Olivine is commonly found in all chondrites within both the matrix and chondrules, achondrites including most primitive achondrites and some evolved achondrites, in pallasites as large yellow-green crystals (brown when terrestrialized), in the silicate portion in the chondrule-like objects of Dhofar 225 severely constrain the maximum temperature of metamorphism. In particular, zoning of olivine grains observed in Dhofar 735 and Belgica 7904 indicates a short heating duration that negates the theory of heating by decay of radioactive elements (Nakato et al., 2011). Aqueously altered carbonaceous chondrites that have experienced thermal metamorphism have been classified according to their degree of heating and corresponding phyllosilicate dehydration. Estimates of dehydration temperatures are shown below (Nakamura, 2005):

ChondrulesRoughly spherical aggregate of coarse crystals formed from the rapid cooling and solidification of a melt at  ~1400 ° C. Large numbers of chondrules are found in all chondrites except for the CI group of carbonaceous chondrites. Chondrules are typically 0.5-2 mm in diameter and are usually composed of olivine in Dhofar 225 are sparse (24 vol%), and similar in size (0.3 mm) to those of CM chondrites. Olivine is forsteritic and commonly occurs as aggregates up to 0.6 mm in size, and as chondrule-like objects. The matrix constitutes 70 vol% and is primarily composed of phyllosilicates (serpentineName used for a large group of phyllosilicate minerals with the generalized formula X2-3 Y2 O5 (OH)4. Due to their various structures (meteoritics focuses primarily on (Fe, Mg)3Si2O5(OH)4), serpentine can be used to understand the chemistry and progress of aqueous alteration (hydration) of olivine, amphibole, or pyroxene dating back to), with minor sulfides, phosphides, phosphates, FeNi-metal, and chromiteBrownish-black oxide of chromium and iron (Cr-Fe oxide), Cr2FeO4, found in many meteorite groups., with only rare CAIsSub-millimeter to centimeter-sized amorphous objects found typically in carbonaceous chondrites and ranging in color from white to greyish white and even light pink. CAIs have occasionally been found in ordinary chondrites, such as the L3.00 chondrite, NWA 8276 (Sara Russell, 2016). CAIs are also known as refractory inclusions since they (2 vol%). A previously unknown mineralInorganic substance that is (1) naturally occurring (but does not have a biologic or man-made origin) and formed by physical (not biological) forces with a (2) defined chemical composition of limited variation, has a (3) distinctive set of of physical properties including being a solid, and has a (4) homogeneous phase, Ca,Fe-oxysulfide, was identified in the matrix, possibly an oxidationOxidation and reduction together are called redox (reduction and oxidation) and generally characterized by the transfer of electrons between chemical species, like molecules, atoms or ions, where one species undergoes oxidation, a loss of electrons,  while another species undergoes reduction, a gain of electrons. This transfer of electrons between reactants product of a primary sulfide phase (Ivanova et al., 2010). Tochilinite, characteristically abundant in CM chondrites, has been mostly thermally decomposed to troiliteBrass colored non-magnetic mineral of iron sulfide, FeS, found in a variety of meteorites. and oxides in both Dhofar 225 and Dhofar 735, as well as in the Belgica-like grouplet. The similarly thermally unstable P-rich oxysulfides only occur in very low abundances (Ivanova et al., 2005). Other rare minerals identified include eskolaite and Cr-barringerite.