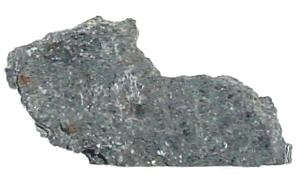 Found January 21, 2000
18° 38.6′ N., 54° 25.8′ E. A single black, 184 g, fusion-crusted stone was found in Oman. This Karoonda-type carbonaceous chondriteCarbonaceous chondrites represent the most primitive rock samples of our solar system. This rare (less than 5% of all meteorite falls) class of meteorites are a time capsule from the earliest days in the formation of our solar system. They are divided into the following compositional groups that, other than has a dark-gray, porous, friable, fine-grained matrixFine grained primary and silicate-rich material in chondrites that surrounds chondrules, refractory inclusions (like CAIs), breccia clasts and other constituents. (65 vol%), containing chondrulesRoughly spherical aggregate of coarse crystals formed from the rapid cooling and solidification of a melt at  ~1400 ° C. Large numbers of chondrules are found in all chondrites except for the CI group of carbonaceous chondrites. Chondrules are typically 0.5-2 mm in diameter and are usually composed of olivine (up to 1 mm) and plagioclase-rich objects, but lacking FeNi-metal. The chondrules contain primary glass and have well-defined boundaries, indicative of a low degree of thermal metamorphism. Likewise, the plagioclase-rich objects have well-defined boundaries and have a wide compositional range of feldsparAn alumino-silicate mineral containing a solid solution of calcium, sodium and potassium. Over half the Earth’s crust is composed of feldspars and due to their abundance, feldspars are used in the classification of igneous rocks. A more complete explanation can be found on the feldspar group page., further indication of a low petrologic typeMeasure of the degree of aqueous alteration (Types 1 and 2) and thermal metamorphism (Types 3-6) experienced by a chondritic meteorite. Type 3 chondrites are further subdivided into 3.0 through 3.9 subtypes.. Other properties inherent in this meteoriteWork in progress. A solid natural object reaching a planet’s surface from interplanetary space. Solid portion of a meteoroid that survives its fall to Earth, or some other body. Meteorites are classified as stony meteorites, iron meteorites, and stony-iron meteorites. These groups are further divided according to their mineralogy and suggest that it experienced oxidizingOxidation and reduction together are called redox (reduction and oxidation) and generally characterized by the transfer of electrons between chemical species, like molecules, atoms or ions, where one species undergoes oxidation, a loss of electrons,  while another species undergoes reduction, a gain of electrons. This transfer of electrons between reactants conditions during nebular condensation. The very low S content and lack of troiliteBrass colored non-magnetic mineral of iron sulfide, FeS, found in a variety of meteorites. is consistent with the removal of S as an oxide during nebular processes. 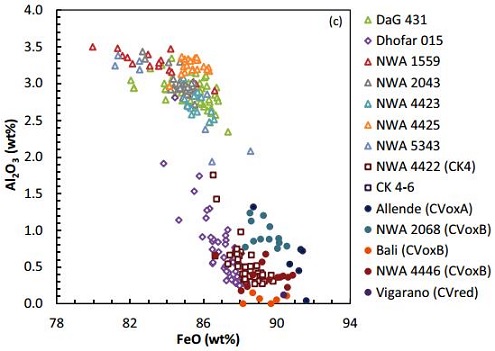 CK3 chondrites are open triangles, CK4–6 chondrites are open squares, Dhofar 015 is an open diamondOne of the naturally occurring forms of carbon found in meteorites. Each C atom is bonded through covalent sp3 hydrid orbitals to four others. The strength of the C-C bonds makes diamond the hardest naturally occurring substance (according to the Mohs scale) in terms of resistance to scratching. There are, and CV chondrites are solid circles.
Diagram credit: Dunn et al., MAPS vol. 51, #9, p. 1711 (2016)
‘Magnetite in the unequilibrated CK chondrites: Implications for metamorphism and new insights into the relationship between the CV and CK chondrites’
(http://dx.doi.org/10.1111/maps.12691) The results of this new study based on individual mineralInorganic substance that is (1) naturally occurring (but does not have a biologic or man-made origin) and formed by physical (not biological) forces with a (2) defined chemical composition of limited variation, has a (3) distinctive set of of physical properties including being a solid, and has a (4) homogeneous chemistries are contrary to those of previous studies involving bulk compositional analyses, likely due to the heterogeneous nature of these meteorite groups (Dunn et al., 2016). Resolution between the CV and CK chondriteClass of carbonaceous chondrite named for the Karoonda meteorite that fell in Australia in 1930. They are more oxidized than all other carbonaceous chondrites and genetically distinct from CV chondrites. CK chondrites appear dark-gray or black due to a high percentage of Cr-rich magnetite dispersed in a matrix of dark groups is apparent utilizing magnetite compositional diagrams (see diagrams below). A comparitive analysis was conducted by Dunn et al. (2018) between the most unequilibrated CK chondriteChondrites are the most common meteorites accounting for ~84% of falls. Chondrites are comprised mostly of Fe- and Mg-bearing silicate minerals (found in both chondrules and fine grained matrix), reduced Fe/Ni metal (found in various states like large blebs, small grains and/or even chondrule rims), and various refractory inclusions (such known, NWA 5343 (3.6/3.7), and its possible CV-type precursor represented by the reduced CV3.3 Vigarano. They found that both the porosityThe volume percentage of a rock that consists of void space. Vesicular porosity is a type of porosity resulting from the presence of vesicles, or gas bubbles, in igneous rock such as the pumice presented here. Vesicular porosity is very rare in meteorites and is often associated with slag, one and the texture of matrix olivine in NWA 5343 were inconsistent with metamorphism of Vigarano-like material. Dhofar 015 is clearly distinguished from the group of unequilibrated CK chondrites; although Dhofar 015 has chondrule textures, matrix textures, and a feldspar compositional range consistent with petrologic type CK3.9 (Ivanova et al., 2000), its fayalitePure* iron end-member (Fe2SiO4) of the olivine solid solution series and an important mineral in meteorites. When iron (Fe) is completely substituted by magnesium, it yields the the pure Mg-olivine end-member, forsterite (Mg2SiO4). The various Fe and Mg substitutions between these two end-members are described based on their forsteritic (Fo) value (Fa32) and its magnetite composition places it among the group of equilibrated CK chondrites. Therefore, Dunn et al. (2016) contend that Dhofar 015 should be classified as an equilibrated CK4. Magnetite Composition Among CV and CK Chondrites (B)

CK3 chondrites are open triangles, CK4–6 chondrites are open squares, Dhofar 015 is an open diamond, and CV chondrites are solid circles.
Diagrams credit: Dunn et al., MAPS vol. 51, #9, pp. 1712–1713 (2016)
‘Magnetite in the unequilibrated CK chondrites: Implications for metamorphism and new insights into the relationship between the CV and CK chondrites’
(http://dx.doi.org/10.1111/maps.12691) Previous studies (e.g., Sanborn et al., 2014) have established that a coupled Δ17O vs. ε54Cr diagram is one of the best diagnostic tools for determining genetic relationships between meteorites. New Cr-isotopic analyses were conducted by Yin et al. (2017, 2019) for a broad sampling of CK and CV chondrites. When combined with previous analyses, it was determined that CK chondrites have an average ε54Cr value of +0.65 (±0.04), while the CV chondrites have an average value of +0.88 (±0.06). The results are consistent with an origin from two distinct parent bodies (see diagrams below, and also the NWA 6047 page). Cr IsotopeOne of two or more atoms with the same atomic number (Z), but different mass (A). For example, hydrogen has three isotopes: 1H, 2H (deuterium), and 3H (tritium). Different isotopes of a given element have different numbers of neutrons in the nucleus. Weighted Average For CV and CK Chondrites 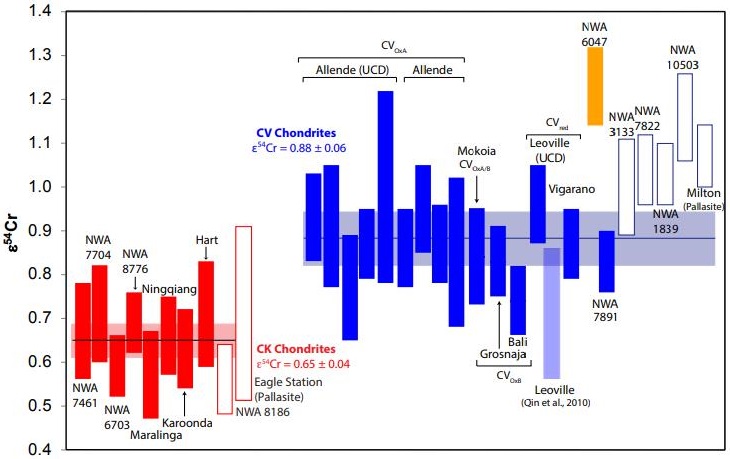 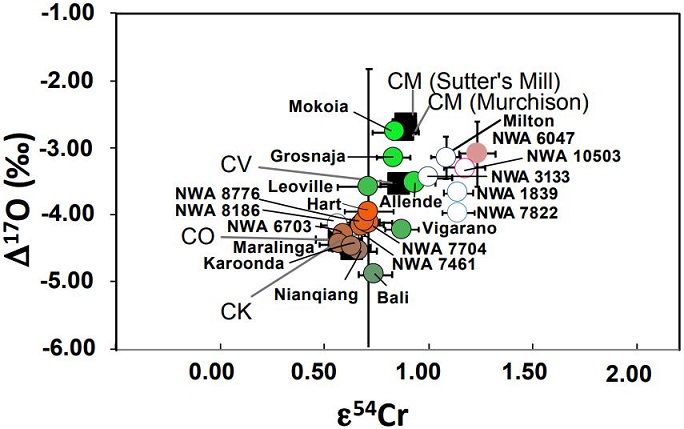 click on photo for a magnified view Diagrams credit: Yin and Sanborn et al., 50th LPSC, #3023 (2019)
Dhofar 015 is a relatively fresh meteorite with a weathering grade of W1 on the Wlotzka (1993) scale, and a shock stageA petrographic assessment, using features observed in minerals grains, of the degree to which a meteorite has undergone shock metamorphism. The highest stage observed in 25% of the indicator grains is used to determine the stage. Also called "shock level".               of S3. Meteorites constituting the equilibrated CV group have an average porosity of 14%, virtually the same as that measured for the unequilibrated CV group (ave. 14.6%; Macke et al., 2011). The photo above shows the interior side of a 0.47 g specimen of Dhofar 015 while that below shows the fusion-crusted side. 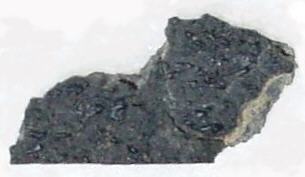