This widespread desert phenomena has been considered by some to be a biogeochemical process that occurs in arid regions throughout the world (e.g., Grote and Krumbein, 1992). Desert varnish coatings on rocks might only be 0.01 mm thick, but they can turn entire desert mountain ranges black or reddish brown. Desert varnish is the result of a disequilibrium process incorporating oxides of manganese and iron, along with clays that form together on the surface of rocks exposed to the SunOur parent star. The structure of Sun's interior is the result of the hydrostatic equilibrium between gravity and the pressure of the gas. The interior consists of three shells: the core, radiative region, and convective region. Image source: http://eclipse99.nasa.gov/pages/SunActiv.html. The core is the hot, dense central region in which the for thousands of years. Desert varnish is considered by some to have formed by the actions of microscopic bacterial colonies living on the rock surface, but evidence for this process has not been documented. Trace amounts of manganese and iron are absorbed from the atmosphere and precipitated as a black layer of manganese oxide or reddish iron oxide on the rock surface. This thin layer also includes cemented clay particles. It has been estimated that up to 10,000 years are required for a complete varnish coating to form in extreme arid desert regions. A diagramatic representation of a possible biogeochemical process is shown below: 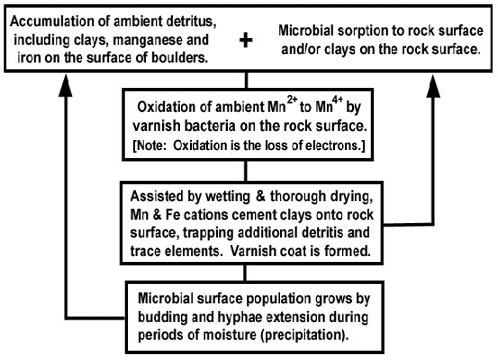 Perry et al. (2006) present their analysis of desert varnish in ‘Baking black opal in the desert sun: The importance of silicaSilicon dioxide, SiO2. in desert varnish’. They revealed the presence of amorphousMaterial without the regular, ordered structure of crystalline solids. Amorphous substances, like glass, lack a definite repeating pattern in their atomic structures (crystallinity). There may be small regions of order, but, overall there is disorder.   hydrated silica (opal) and the silica mineralInorganic substance that is (1) naturally occurring (but does not have a biologic or man-made origin) and formed by physical (not biological) forces with a (2) defined chemical composition of limited variation, has a (3) distinctive set of of physical properties including being a solid, and has a (4) homogeneous moganite, similar to findings from siliceous hot-spring deposits. They conclude ‘… the slow dissolution of silica from anhydrous and hydrous minerals, and its subsequent gelling, condensation, and hardening, provides a simple explanation of a formation mechanism for desert varnish and silica glazes and the incorporation of organicPertaining to C-containing compounds. Organic compounds can be formed by both biological and non-biological (abiotic) processes. material from local environments.’ In their paper ‘Nanometer-scale complexity, growth, and diagenesis in desert varnish’, Garvie et al. (2008) report on a high-resolution and spectroscopic study of desert varnish on a variety of rock samples from the Sonoran Desert of Arizona. They found that clay is the primary component of desert varnish incorporating nm-scale layers rich in Mn-bearing phases and Fe oxide (hematiteFe-oxide mineral (Fe2O3) that may be the major cause of the red color on Mars. Coarser-grained gray hematite has the same chemical formula as the red variety, but a different crystalline structure. Deposits of gray hematite found in the Terra Meridiani region of Mars may suggest that water once circulated), along with some secondary and trace elements proposed to be derived from atmospheric aerosols. Although C grains within the varnish possibly represent fungal and/or bacterial remnants, the formation of desert varnish is considered to be the result of mainly abioticNon-biological in origin, or not derived from living organisms. processes of diagenesis including hydrationReaction of a substance with water., evaporationProcess in which atoms or molecules in a liquid state (or solid state if the substance sublimes) gain sufficient energy to enter the gaseous state., dissolution, freezing, baking, redoxOxidation and reduction together are called redox (reduction and oxidation) and generally characterized by the transfer of electrons between chemical species, like molecules, atoms or ions, where one species undergoes oxidation, a loss of electrons,  while another species undergoes reduction, a gain of electrons. This transfer of electrons between reactants, and other forms of chemical and structural modification. They contend that opal may serve as a cementing material in some rocks. It is calculated that desert varnish is very slowly accumulated at rates of <1µm to perhaps tens of µm/t.y.