Iron, IIF, octahedriteMost Common type of iron meteorite, composed mainly of taenite and kamacite and named for the octahedral (eight-sided) shape of the kamacite crystals. When sliced, polished and etched with an acid such as nitric acid, they display a characteristic Widmanstätten pattern. Spaces between larger kamacite and taenite plates are often 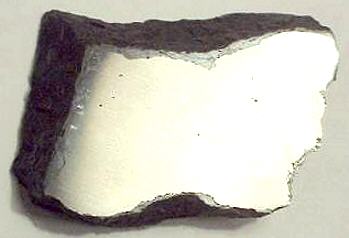 Found 1965
29° 22′ N., 100° 58′ W. A single iron meteoriteMeteorite composed mainly of iron (Fe) and nickel (Ni) in the form of two alloys, kamacite and taenite. Due to their metallic makeup and extraordinary weight, iron meteorites are easily distinguished from ordinary rocks. Also, because they rarely break up in the air and suffer much less from the effects weighing 3,346 g was found by a Mr. Mueller 4.5 miles west of Del Rio, Texas on a ranch owned by Mr. E. Daughtrey. Following a search of the area, five additional pieces were found, having a combined weight of 250 g.

Del Rio is a polycrystalline ataxiteWork in Progress Relatively rare variety of iron meteorite (designated type D) made almost entirely of taenite, a solid solution of Fe and 27 to 65% Ni. The Greek name means "without structure" and refers to the lack of a visible Widmanstätten pattern (spindles of kamacite are visible only microscopically). with distorted kamaciteMore common than taenite, both taenite and kamacite are Ni-Fe alloys found in iron meteorites. Kamacite, α-(Fe,Ni), contains 4-7.5 wt% Ni, and forms large body-centered cubic crystals that appear like broad bands or beam-like structures on the etched surface of a meteorite; its name is derived from the Greek word bandwidths of ~0.07 mm. These produce, in places, a finest-textured Thomson (Widmanstätten) structure in a mostly plessiteA fine-grained intergrowth of kamacite and taenite that fills in the wedges between wide kamacite and taenite bands in octahedrites. The name derives from the Greek word for "filling." field. Sub-mm-sized troiliteBrass colored non-magnetic mineral of iron sulfide, FeS, found in a variety of meteorites. inclusions occur throughout. The masses have been terrestrially weathered to the point where the fusion crustMelted exterior of a meteorite that forms when it passes through Earth’s atmosphere. Friction with the air will raise a meteorite’s surface temperature upwards of  4800 K (8180 °F) and will melt (ablate) the surface minerals and flow backwards over the surface as shown in the Lafayette meteorite photograph below. and 2–3 mm of the outer surface has been removed. Resolution of this group is based on several factors including structure, which ranges from ataxitic to plessitic. The group has an unusually high Ge/Ga ratio, a high Ni content, a high Co and Cu content, and a low P content. The compositional trends are most consistent with igneous fractional crystallizationA crystallization process in which minerals crystallizing from a magma are isolated from contact with the liquid. It is a key process in the formation of igneous rocks during the process of magmatic differentiation. Also known as crystal fractionation. of a coreIn the context of planetary formation, the core is the central region of a large differentiated asteroid, planet or moon and made up of denser materials than the surrounding mantle and crust. For example, the cores of the Earth, the terrestrial planets and differentiated asteroids are rich in metallic iron-nickel.. The Ni content in Del Rio runs counter to accepted theory, having a positive correlation with the Thomson (Widmanstätten) structure bandwidth. This occurrence could be explained by either differences in the cooling rate, or the effects of bulk P content on bandwidth growth. Oxygen-isotopic data indicate that a relationship exists among the IIF irons, the Eagle Station pallasites, the CV carbonaceous chondritesChondrites are the most common meteorites accounting for ~84% of falls. Chondrites are comprised mostly of Fe- and Mg-bearing silicate minerals (found in both chondrules and fine grained matrix), reduced Fe/Ni metal (found in various states like large blebs, small grains and/or even chondrule rims), and various refractory inclusions (such, and other diverse meteorites, which suggests they probably all formed in a similar nebulaAn immense interstellar, diffuse cloud of gas and dust from which a central star and surrounding planets and planetesimals condense and accrete. The properties of nebulae vary enormously and depend on their composition as well as the environment in which they are situated. Emission nebula are powered by young, massive region, although perhaps on multiple parent bodies. Based on the cooling rate of ~5°C/m.y. as determined from taeniteLess common than kamacite, both taenite and kamacite are Ni-Fe alloys found in iron meteorites. Taenite, γ-(Fe,Ni), has 27-65 wt% Ni, and forms small crystals that appear as highly reflecting thin ribbons on the etched surface of a meteorite; the name derives from the Greek word for "ribbon." profiles, the diameter of the IIF parent bodyThe body from which a meteorite or meteoroid was derived prior to its ejection. Some parent bodies were destroyed early in the formation of our Solar System, while others like the asteroid 4-Vesta and Mars are still observable today. was calculated to have been 50–200 km. See ‘The Breakup of Antaeus’ for additional details. The IIF group contains only six members with a compositional gap dividing four low-Ni members (~10–11%; Purmela, Dorofeevka, Monahans 1938, and Del Rio) from two high-Ni members (~13–14%; Corowa and Repeev Khutor). The photo above shows a 41.6 g slice of Del Rio previously in the Elbert A. King Collection.