Ureilite
Polymict
Deep regolithMixture of unconsolidated rocky fragments, soil, dust and other fine granular particles blanketing the surface of a body lacking an atmosphere. Regolith is the product of "gardening" by repeated meteorite impacts, and thermal processes (such as repeated heating and cooling cycles).   fragmental brecciaWork in Progress ... A rock that is a mechanical mixture of different minerals and/or rock fragments (clasts). A breccia may also be distinguished by the origin of its clasts: (monomict breccia: monogenetic or monolithologic, and polymict breccia: polygenetic or polylithologic). The proportions of these fragments within the unbrecciated material

Found 1997
27° 01.68′ N., 16° 21.52′ E. Three fragments totaling 740 g were found in the Libyan Desert. Two other stones that were recovered later, DaG 665 (363 g) and DaG 874 (64.6 g), are possibly paired. Dar al Gani 319 is one of only a handful of polymict members among a mostly monomict ureilite population. This particular meteoriteWork in progress. A solid natural object reaching a planet’s surface from interplanetary space. Solid portion of a meteoroid that survives its fall to Earth, or some other body. Meteorites are classified as stony meteorites, iron meteorites, and stony-iron meteorites. These groups are further divided according to their mineralogy and has a brecciated structure and contains solar type rare gases, suggesting a surface regolith residence on the ureilite parent bodyThe body from which a meteorite or meteoroid was derived prior to its ejection. Some parent bodies were destroyed early in the formation of our Solar System, while others like the asteroid 4-Vesta and Mars are still observable today.. Diamonds and many types of inclusions have been found in this meteorite. The diverse clasts have been categorized into seven general groups (Ikeda et al., 2000):

The main clastA mineral or rock fragment embedded in another rock. type present in polymict ureilites is the common Type I monomict ureilite, containing mainly olivineGroup of silicate minerals, (Mg,Fe)2SiO4, with the compositional endpoints of forsterite (Mg2SiO4) and fayalite (Fe2SiO4). Olivine is commonly found in all chondrites within both the matrix and chondrules, achondrites including most primitive achondrites and some evolved achondrites, in pallasites as large yellow-green crystals (brown when terrestrialized), in the silicate portion, pigeoniteLow-Ca clinopyroxene, (Ca,Mg,Fe)SiO3, found as a major mineral in eucrites and shergottites. In order to be considered pigeonite, the clinopyroxene must contain 5 to 20 mol % of calcium (Wo5 - 20). Chondrites of petrologic types 4 and below contain significant low-Ca clinopyroxene. During metamorphism to higher temperatures, all existing, and carbonElement commonly found in meteorites, it occurs in several structural forms (polymorphs). All polymorphs are shown to the left with * indicating that it been found in meteorites and impact structures: a. diamond*; b. graphite*; c. lonsdalite*; d. buckminsterfullerene* (C60); e. C540; f. C70; g. amorphous carbon; h. carbon nanotube*.. Type I ureilites crystallized from the residues that remained after the extraction of a partial melt component, and they probably represent mantleMain silicate-rich zone within a planet between the crust and metallic core. The mantle accounts for 82% of Earth's volume and is composed of silicate minerals rich in Mg. The temperature of the mantle can be as high as 3,700 °C. Heat generated in the core causes convection currents in material. Type II ureilite clasts, which contain mainly olivine, augiteHigh-Ca clinopyroxene, (Ca,Mg,Fe)SiO3, that occurs in many igneous rocks, particularly those of basaltic composition. In order to be considered augite, the clinopyroxene must contain 20 to 45 mol % of calcium (Wo20 - 45). An important and unique Martian meteorite is NWA 8159, that has been classified as an augite basalt., and orthopyroxeneOrthorhombic, low-Ca pyroxene common in chondrites. Its compositional range runs from all Mg-rich enstatite, MgSiO3 to Fe-rich ferrosilite, FeSiO3. These end-members form an almost complete solid solution where Mg2+ substitutes for Fe2+ up to about 90 mol. % and Ca substitutes no more than ~5 mol. % (higher Ca2+ contents occur, along with minor sulfide and metalElement that readily forms cations and has metallic bonds; sometimes said to be similar to a cation in a cloud of electrons. The metals are one of the three groups of elements as distinguished by their ionization and bonding properties, along with the metalloids and nonmetals. A diagonal line drawn, are present in a much lower abundance. Magmatic inclusions, usually containing a feldspathic glass component, are present in olivine and orthopyroxene grains of the Type II clasts. Type II ureilites are magmatic cumulates formed by fractional crystallizationA crystallization process in which minerals crystallizing from a magma are isolated from contact with the liquid. It is a key process in the formation of igneous rocks during the process of magmatic differentiation. Also known as crystal fractionation. of basaltic magmas derived from alkali-rich chondritic precursor material. They crystallized within shallow magmaMolten silicate (rock) beneath the surface of a planetary body or moon. When it reaches the surface, magma is called lava. chambers at high cooling rates. 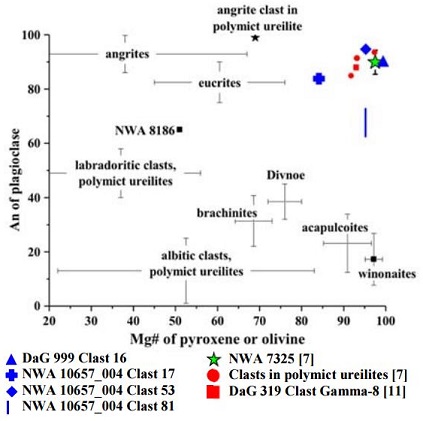 Diagram credit: Boyle et al., 48th LPSC, #1219 (2017) Although the Type I and Type II mafic ureilitic clasts show a range of O-isotopic compositions, their presence within a single polymict ureilite demonstrates that they all were formed on a common parent body. In a similar manner, while O-isotopic deviations among the various ureilite subgroups preclude them from being related by igneous processes, the heterogeneity of the polymict ureilites suggests that there was a common parent body for all ureilite subgroups. Furthermore, the olivine compositions within a single thin sectionThin slice or rock, usually 30 µm thick. Thin sections are used to study rocks with a petrographic microscope. of polymict ureilite EET 87720 was found to span the entire range of olivine compositions recorded for unbrecciated ureilites, and the Mg# distribution is nearly identical to that of unbrecciated ureilites—two more factors which demonstrate a common origin for all ureilites (Downes and Mittlefehldt, 2006). Any measurable differences that do exist among individual olivines can be attributed to the fact that widespread impact gardening occurred subsequent to the collisional disruption and reassembly of the proto-ureilite parent asteroid, thus producing the compositional diversity observed. The ureilite parent body was just large enough to attain temperatures high enough to produce partial melting (up to ~30%) promoting low degrees of basaltic melt migration, but less than that necessary to produce extensive melting and formation of a magma oceanCompletely molten surfaces of terrestrial planets or moons that formed soon after accretion. Samples returned by the Apollo missions provide evidence of a lunar magma ocean, crystallization of which produced a stratified Moon with a low-density crust formed by accumulation of the mineral plagioclase overlying a higher density mantle of. Due to this low degree of melting, perhaps caused by the sudden onset of cooling following impact disruption and reassembly, coupled with rapid melt extraction due to abundant smelting-produced CO+CO2, ureilites have retained the chemical and isotopic heterogeneity of the original carbonaceous chondrite-like asteroid as represented by the unmelted clast population. From chemical and isotopic compositions, it can be inferred that the composition of the UPB was similar to alkali-rich CV-like chondrite material, and that it was intermediate in size between undifferentiated chondritic asteroids and those asteroids large enough to have experienced melting, differentiationA process by which a generally homogeneous chondritic body containing mostly metal, silicates and sulfides will melt and form distinct (differentiated) layers of different densities.   When the melting process continues for a long enough period of time, the once chondritic body will re-partition into layers of different composition including, and core formation; it probably had a diameter of ~200 km (Goodrich et al., 2007). In an attempt to identify possible common ejection events among the ureilites, Beard and Swindle (2017) conducted a comparative study of 39 different samples utilizing three parameters: CRE age, Fo content in olivine (Mg#), and Δ17O value. They resolved ten potential clusters, several of which show concordance in their CRE age and Mg# but not in Δ17O value (heterogeneous), and three that are concordant in all three parameters (homogeneous). The oldest cluster they resolved, comprising DaG 084, DaG 319, Goalpara, and Haverö (homogeneous, although the Δ17O values for DaG 084 and DaG 319 have not yet been determined), reflects an ejection event that occurred 20.1 (±1.2) m.y. ago. The CRE age of this cluster is consistent with the average of all CRE age results obtained to date of 19.7 (±2.8) m.y. (Riebe et al., 2017). An excellent petrographic thin section micrograph of DaG 319 can be seen on John Kashuba’s page. This ureilite has a weathering grade of W2 and shock features consistent with low shock. The DaG 319 specimen shown above weighs 5.7 g.