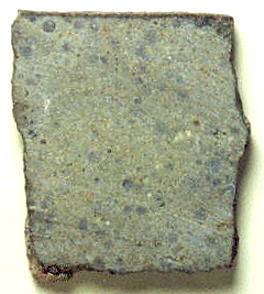 Found March 24, 1997
27° 21.74′ N., 16° 05.38′ E. Two fragments of this formerly Karoonda-type carbonaceous chondriteCarbonaceous chondrites represent the most primitive rock samples of our solar system. This rare (less than 5% of all meteorite falls) class of meteorites are a time capsule from the earliest days in the formation of our solar system. They are divided into the following compositional groups that, other than were found in the Libyan Sahara weighing a total of 492 g. Dar al Gani 275 has been weakly shocked to stage S2, and has been highly weathered to grade W4 on the Wlotzka weathering scale (1993). Another similar meteoriteWork in progress. A solid natural object reaching a planet’s surface from interplanetary space. Solid portion of a meteoroid that survives its fall to Earth, or some other body. Meteorites are classified as stony meteorites, iron meteorites, and stony-iron meteorites. These groups are further divided according to their mineralogy and of petrologic typeMeasure of the degree of aqueous alteration (Types 1 and 2) and thermal metamorphism (Types 3-6) experienced by a chondritic meteorite. Type 3 chondrites are further subdivided into 3.0 through 3.9 subtypes. 4/5, DaG 250, was also found in the Sahara. However, DaG 275 has a different cosmic-ray exposure ageTime interval that a meteoroid was an independent body in space. In other words, the time between when a meteoroid was broken off its parent body and its arrival on Earth as a meteorite - also known simply as the "exposure age." It can be estimated from the observed effects (35.2 m.y.) compared to DaG 250 (27 m.y.), and the noble gasElement occurring in the right-most column of the periodic table; also called "inert" gases. In these gases, the outer electron shell is completely filled, making them very unreactive. data do not exclude separate parent bodies.

The CK chondritesChondrites are the most common meteorites accounting for ~84% of falls. Chondrites are comprised mostly of Fe- and Mg-bearing silicate minerals (found in both chondrules and fine grained matrix), reduced Fe/Ni metal (found in various states like large blebs, small grains and/or even chondrule rims), and various refractory inclusions (such were designated as a separate group in 1990, named for the only observed fallMeteorite seen to fall. Such meteorites are usually collected soon after falling and are not affected by terrestrial weathering (Weathering = 0). Beginning in 2014 (date needs confirmation), the NomComm adopted the use of the terms "probable fall" and "confirmed fall" to provide better insight into the meteorite's history. If at the time in Karoonda, Australia (a second CK4 fall occurred in Kobe, Japan in 1999). Members of the CK group were previously distinguished from the CO and CV groups based on the following characteritics: 1) low chondruleRoughly spherical aggregate of coarse crystals formed from the rapid cooling and solidification of a melt at  ~1400 ° C. Large numbers of chondrules are found in all chondrites except for the CI group of carbonaceous chondrites. Chondrules are typically 0.5-2 mm in diameter and are usually composed of olivine/matrix ratio; 2) intermediate chondrule size; 3) lack of chondrule rims; 4) low abundance of refractory inclusionsInclusions found predominantly in carbonaceous chondrites and are rich in refractory elements particularly calcium, aluminum and titanium that in various combinations form minerals such as spinel, melilite, perovskite and hibonite. There are two types of refractory inclusion: • Ca Al-rich inclusions (CAIs) • Amoeboid olivine aggregates (AOAs) Refractory inclusions were; 5) low C content; 6) intermediate abundance of refractory lithophiles; 7) O-isotopic composition. However, in a study of the CK group conducted by Greenwood et al. (2003), it was proposed that these characteristics are evidence of the highly metamorphosed nature of most members of this group. They found that CK bulk compositions are similar to those of CV chondritesMeteorite class named after the Vigarano meteorite that fell in Italy in 1910. They have abundant large, well-defined rimless (?) chondrules of magnesium-rich olivine (~0.7 mm diameter; 40-65 vol. %), often surrounded by iron sulfide. They also contain 7-20 vol. % CAIs. The often dark-gray matrix is dominated by Fe-rich, and that the other defining criteria could be explained in terms of higher degrees of metamorphicRocks that have recrystallized in a solid state due to changes in temperature, pressure, and chemical environment. alteration. Furthermore, they argued that the few CK3 members that have been identified are more similar to oxidizedOxidation and reduction together are called redox (reduction and oxidation) and generally characterized by the transfer of electrons between chemical species, like molecules, atoms or ions, where one species undergoes oxidation, a loss of electrons,  while another species undergoes reduction, a gain of electrons. This transfer of electrons between reactants CV3 members, thus questioning whether CK chondrites actually represent a unique carbonaceous chondriteChondrites are the most common meteorites accounting for ~84% of falls. Chondrites are comprised mostly of Fe- and Mg-bearing silicate minerals (found in both chondrules and fine grained matrix), reduced Fe/Ni metal (found in various states like large blebs, small grains and/or even chondrule rims), and various refractory inclusions (such group. To that goal, a petrologic study was conducted by Chaumard et al. (2009) comparing the CK chondrites to the oxidized subgroup of CV chondrites. They found that matrixFine grained primary and silicate-rich material in chondrites that surrounds chondrules, refractory inclusions (like CAIs), breccia clasts and other constituents., chondrule and CAISub-millimeter to centimeter-sized amorphous objects found typically in carbonaceous chondrites and ranging in color from white to greyish white and even light pink. CAIs have occasionally been found in ordinary chondrites, such as the L3.00 chondrite, NWA 8276 (Sara Russell, 2016). CAIs are also known as refractory inclusions since they abundances in CK chondrites are similar to those characteristics in some oxidized CV members. Moreover, dark inclusions commonly present in the CV group are also abundant in the CK group. They also determined that CK chondrites have an olivineGroup of silicate minerals, (Mg,Fe)2SiO4, with the compositional endpoints of forsterite (Mg2SiO4) and fayalite (Fe2SiO4). Olivine is commonly found in all chondrites within both the matrix and chondrules, achondrites including most primitive achondrites and some evolved achondrites, in pallasites as large yellow-green crystals (brown when terrestrialized), in the silicate portion chemistry that is correlated with the textural equilibration of the matrix. Taking these findings into consideration, the investigators suggest that the CK group might represent a metamorphic continuum beginning with the oxidized CV subgroup rather than representing a separate parent bodyThe body from which a meteorite or meteoroid was derived prior to its ejection. Some parent bodies were destroyed early in the formation of our Solar System, while others like the asteroid 4-Vesta and Mars are still observable today.. After in-depth analyses of many CV and CK meteorites having a wide range of petrologic types was conducted by Wasson et al. (2013), they presented a reasoned argument for merging the CK and CV groups into a single unified group. The geochemical and petrological justification for such a reclassification of the CK chondrites, along with details of their proposed taxonomic scheme, can be found on the Dhofar 015 page. Subsequent studies have demonstrated a high likelihood for separate parent bodies. One such study conducted by Dunn et al. (2016) compared magnetiteFe oxide, Fe2+Fe3+2O4, containing oxidized iron (Fe3+) found in the matrix of carbonaceous chondrites and as diagnostic component in CK chondrites. In CK chondrites, magnetite is typically chromian, containing several wt. % Cr2O3. in a number of CK and CV chondrites. They presented geochemical, mineralogical, and petrographic evidence which is more consistent with separate CV and CK parent bodies. Another study conducted by Yin et al. (2017) utilized a coupled Δ17O vs. ε54Cr diagram to plot several CK and CV chondrites. Through this technique they demonstrated that these two meteorite groups derive from separate parent bodies. Details of these studies can also be found on the Dhofar 015 page. The specimen of DaG 275 shown above is a 15.2 g complete slice.