Iron, IIAB, recrystallized hexahedriteOne of the main types of iron meteorites composed almost entirely of kamacite and named for its cubic (hexahedral) cleavage of α-Fe-Ni crystals. Upon etching, hexahedrites do not display a Widmanstätten pattern, but do often exhibit fine, parallel lines called Neumann lines for their discoverer, Franz Neumann, who first studied
(Compositionally related to group IIG) 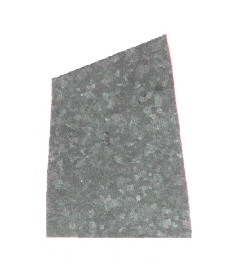 Carver was originally a single hexahedrite crystal that experienced a violent shock event accompanied by relaxation heating; melting of FeS has occurred. This event was followed by recrystallization of the metalElement that readily forms cations and has metallic bonds; sometimes said to be similar to a cation in a cloud of electrons. The metals are one of the three groups of elements as distinguished by their ionization and bonding properties, along with the metalloids and nonmetals. A diagonal line drawn to form a structure composed of a polycrystalline assemblage of small mm-sized grains of kamaciteMore common than taenite, both taenite and kamacite are Ni-Fe alloys found in iron meteorites. Kamacite, α-(Fe,Ni), contains 4-7.5 wt% Ni, and forms large body-centered cubic crystals that appear like broad bands or beam-like structures on the etched surface of a meteorite; its name is derived from the Greek word. Similar shock-recrystallized hexahedrites can be found among our collections. Recently, it was argued by Wasson and Choe (2009) that group IIG irons are chemically similar to those of the IIAB iron group, forming extensions to IIAB trends on element–AuThe astronomical unit for length is described as the "mean" distance (average of aphelion and perihelion distances) between the Earth and the Sun. Though most references state the value for 1 AU to be approximately 150 million kilometers, the currently accepted precise value for the AU is 149,597,870.66 km. The diagrams. They suggest that the formation of IIG irons occurred inside isolated P-rich cavities that remained after crystallizationPhysical or chemical process or action that results in the formation of regularly-shaped, -sized, and -patterned solid forms known as crystals. of an evolved IIAB magmaMolten silicate (rock) beneath the surface of a planetary body or moon. When it reaches the surface, magma is called lava. (see the Tombigbee River page for more complete details). Five other hexahedrites have been found in the Southeast U. S., but all are chemically distinct and unpaired. The specimen of Carver shown above is an 8.3 g interior slice. The photo below shows the reassembled original slice from which this partial slice was taken. 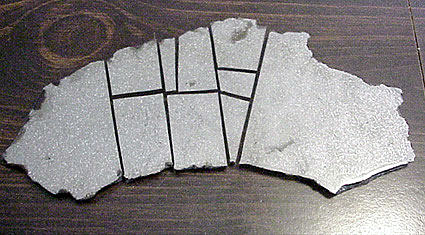 Photo courtesy of Steve Arnold—International MeteoriteWork in progress. A solid natural object reaching a planet’s surface from interplanetary space. Solid portion of a meteoroid that survives its fall to Earth, or some other body. Meteorites are classified as stony meteorites, iron meteorites, and stony-iron meteorites. These groups are further divided according to their mineralogy and Brokerage