Fell March 4, 1960
53° 54′ N., 112° 53′ W. A bolideA very bright fireball that breaks apart in the atmosphere with a minimum brightness approximately equivalent to the full moon. was observed approaching from 40° above the horizon at an altitude of 48 km during the night over Alberta, Canada. After 40 km of luminous flight, the bolide showered an area of 3 km with over 400 kg of fragments. The stones fell in soft snow, which protected the black fusion crustMelted exterior of a meteorite that forms when it passes through Earth’s atmosphere. Friction with the air will raise a meteorite’s surface temperature upwards of  4800 K (8180 °F) and will melt (ablate) the surface minerals and flow backwards over the surface as shown in the Lafayette meteorite photograph below. and provided great contrast to enable the locals to easily recover the fragments. The dispersion ellipse was able to be accurately mapped (see diagram below).

Bruderheim is an L6 fragmental brecciaWork in Progress ... A rock that is a mechanical mixture of different minerals and/or rock fragments (clasts). A breccia may also be distinguished by the origin of its clasts: (monomict breccia: monogenetic or monolithologic, and polymict breccia: polygenetic or polylithologic). The proportions of these fragments within the unbrecciated material of shock stageA petrographic assessment, using features observed in minerals grains, of the degree to which a meteorite has undergone shock metamorphism. The highest stage observed in 25% of the indicator grains is used to determine the stage. Also called "shock level".               S4 and contains partly melted metalElement that readily forms cations and has metallic bonds; sometimes said to be similar to a cation in a cloud of electrons. The metals are one of the three groups of elements as distinguished by their ionization and bonding properties, along with the metalloids and nonmetals. A diagonal line drawn grains and opaque veins. Based on rare gas studies, it is thought that the parent bodyThe body from which a meteorite or meteoroid was derived prior to its ejection. Some parent bodies were destroyed early in the formation of our Solar System, while others like the asteroid 4-Vesta and Mars are still observable today. of the L chondritesChondrites are the most common meteorites accounting for ~84% of falls. Chondrites are comprised mostly of Fe- and Mg-bearing silicate minerals (found in both chondrules and fine grained matrix), reduced Fe/Ni metal (found in various states like large blebs, small grains and/or even chondrule rims), and various refractory inclusions (such underwent a catastrophic collision 340 (±50) m.y. ago. Through studies of high-pressure minerals in an L6 sample, it was determined that this metamorphicRocks that have recrystallized in a solid state due to changes in temperature, pressure, and chemical environment. grade occurred at least 10 km below the surface (De Carli et al., 2011). An isochron for the L chondriteOrdinary chondrites low in free Ni-Fe metal (4 to 10 vol. %), containing olivine (Fa22-26) and the orthopyroxene hypersthene (Fs19-22). Average chondrule diameters (0.7 mm) are larger than those in H chondrites. The asteroid 433 Eros is suspected as a parent body, based on reflectance spectra, but most L chondrites parent body based on the robust Hf–W systemDefinable part of the universe that can be open, closed, or isolated. An open system exchanges both matter and energy with its surroundings. A closed system can only exchange energy with its surroundings; it has walls through which heat can pass. An isolated system cannot exchange energy or matter with provides values ranging from ~2.5 to ~14.2 m.y. after CAIsSub-millimeter to centimeter-sized amorphous objects found typically in carbonaceous chondrites and ranging in color from white to greyish white and even light pink. CAIs have occasionally been found in ordinary chondrites, such as the L3.00 chondrite, NWA 8276 (Sara Russell, 2016). CAIs are also known as refractory inclusions since they (Sprung et al., 2011). The Bruderheim specimen shown above is a 7.0 g cut fragment with black fusionProcess in which two lighter atomic nuclei combine to form a heavier atomic nucleus. Very high temperatures are normally required in order for atomic nuclei to collide with sufficient energy to overcome the Coulomb barrier (their mutual electrostatic repulsions). Fusion that occurs under high-temperature conditions is called thermonuclear fusion. Fusion crustOutermost layer of a differentiated planet, asteroid or moon, usually consisting of silicate rock and extending no more than 10s of km from the surface. The term is also applied to icy bodies, in which case it is composed of ices, frozen gases, and accumulated meteoritic material. On Earth, the. 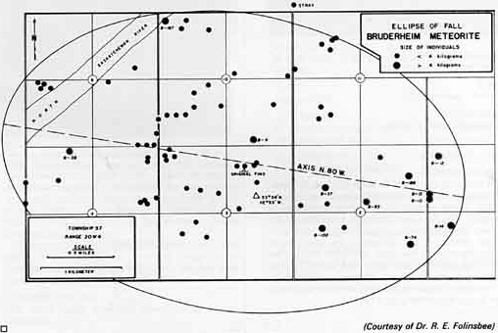 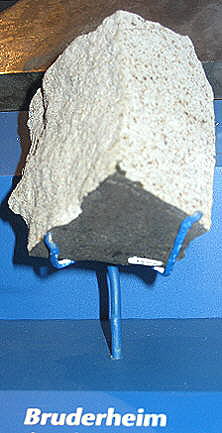