PallasiteOne of two main classes of stony-iron meteorite, the other being mesosiderites. Pallasites are igneous in nature and characterized by crystals of olivine, sometimes peridot (green gem quality clear olivine crystals), embedded in a matrix of Fe-Ni metal. The type specimen, weighing 680 kg, was found in the mountains near, MG (main-group), anomalous metalElement that readily forms cations and has metallic bonds; sometimes said to be similar to a cation in a cloud of electrons. The metals are one of the three groups of elements as distinguished by their ionization and bonding properties, along with the metalloids and nonmetals. A diagonal line drawn composition
high-Δ17O subgroup (see details on the Imilac page)

Found 1882, known before
37° 36′ N., 99° 12′ W. approx. Soon after Frank and Mary Kimberly made their home on the Kansas prairie in Kiowa County, Mary began collecting the black iron rocks she found around the farm believing that they resembled the meteoriteWork in progress. A solid natural object reaching a planet’s surface from interplanetary space. Solid portion of a meteoroid that survives its fall to Earth, or some other body. Meteorites are classified as stony meteorites, iron meteorites, and stony-iron meteorites. These groups are further divided according to their mineralogy and she had seen as a child. Then for years, she tried to have her large pile of iron rocks authenticated by a professional, without success. Finally, a geologist from Washburn College, Dr. Cragen, recognized them as meteorites and purchased a large portion of her collection. This began a profitable business for the Kimberly family selling meteorites from their ‘Kansas Meteorite Farm’. 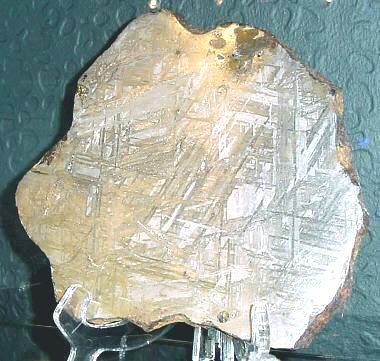 Photo courtesy of the Dr. J. Piatek Collection On Sunday, October 16, 2005, after securing lease agreements to search the properties encompassing the Brenham strewnfield, meteorite hunter Steve Arnold and geologist/attorney Phil Mani instituted a search by metal detectorAny device used to sense the passage of a particle or photon (x-ray, γ-ray, etc.). X-rays can be detected using sealed-gas proportional, gas-flow proportional detectors, and Li-drifted Si semiconductor detectors. A Li-drifted Ge detector is used to count γ-rays in the laboratory. on the farm of Allen and Mary Binford. Prompted by a strong signal, they dug down to findMeteorite not seen to fall, but recovered at some later date. For example, many finds from Antarctica fell 10,000 to 700,000 years ago. an oriented 1,430 pound (650 kg) Brenham mass buried 88 inches underground. This is the largest Brenham mass recovered to date, dubbed ‘King of the Pallasites’. Many additional masses continue to be unearthed by the team. The photos below show the final stage of its excavation, and below that, a close-up of Steve Arnold with his prize (Allen Binford behind). 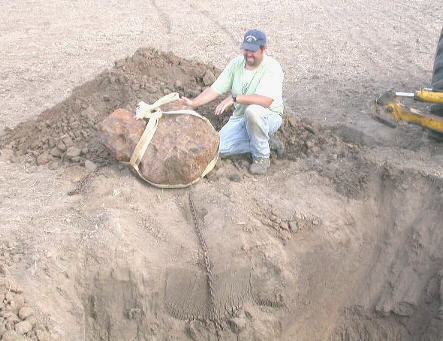 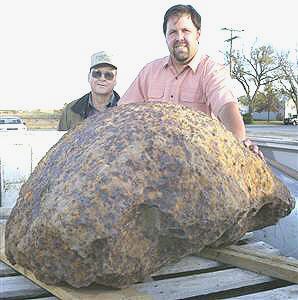