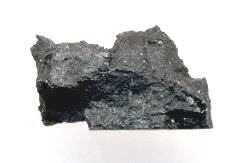 Fell April 20, 1930
54° 14′ N., 52° 29′ E. At 1:30 P.M., a carbonaceous chondriteCarbonaceous chondrites represent the most primitive rock samples of our solar system. This rare (less than 5% of all meteorite falls) class of meteorites are a time capsule from the earliest days in the formation of our solar system. They are divided into the following compositional groups that, other than fell in the Federated SSR, USSR. Only two stones with a combined weight of 1,165.6 g were recovered, while three other small stones were reportedly destroyed. Vacher et al. (2018) observed that Boriskino has an unusual brecciated texture consisting of mm- to cm-sized clasts which were subjected to different degrees of alteration (petrologic types 2.1 to 2.6) and experienced diverse shock histories (up to ~30 GPa). They recognized that some clasts exhibit foliation (planar alignment), fractures, flattened chondrulesRoughly spherical aggregate of coarse crystals formed from the rapid cooling and solidification of a melt at  ~1400 ° C. Large numbers of chondrules are found in all chondrites except for the CI group of carbonaceous chondrites. Chondrules are typically 0.5-2 mm in diameter and are usually composed of olivine, and other features associated with impact deformation events. 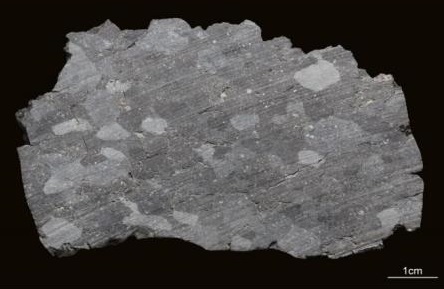 Image credit: Verdier-Paoletti et al., 80th MetSoc, #6081 (2017) OlivineGroup of silicate minerals, (Mg,Fe)2SiO4, with the compositional endpoints of forsterite (Mg2SiO4) and fayalite (Fe2SiO4). Olivine is commonly found in all chondrites within both the matrix and chondrules, achondrites including most primitive achondrites and some evolved achondrites, in pallasites as large yellow-green crystals (brown when terrestrialized), in the silicate portion and pyroxeneA class of silicate (SiO3) minerals that form a solid solution between iron and magnesium and can contain up to 50% calcium. Pyroxenes are important rock forming minerals and critical to understanding igneous processes. For more detailed information, please read the Pyroxene Group article found in the Meteoritics & Classification category. in Boriskino are essentially Fe-free, occurring as forsteritePure* magnesium end-member (Mg2SiO4) of the olivine solid solution series and an important mineral in meteorites. When magnesium (Mg) is completely substituted by iron, it yields the the pure Fe-olivine end member, fayalite (Fe2SiO4). The various Fe and Mg substitutions between these two end-members are described based on their forsteritic (Fo) and enstatiteA mineral that is composed of Mg-rich pyroxene, MgSiO3. It is the magnesium endmember of the pyroxene silicate mineral series - enstatite (MgSiO3) to ferrosilite (FeSiO3).. According to Ohnishi and Kazushige (2003), enstatite has been aqueously altered to serpentineName used for a large group of phyllosilicate minerals with the generalized formula X2-3 Y2 O5 (OH)4. Due to their various structures (meteoritics focuses primarily on (Fe, Mg)3Si2O5(OH)4), serpentine can be used to understand the chemistry and progress of aqueous alteration (hydration) of olivine, amphibole, or pyroxene dating back to by relatively low-pH fluids enriched in Fe and depleted in Na and Si (smectite is produced at higher pH values and higher Na contents as occurs in the CV group). Iron is present mainly within the serpentine-like phyllosilicatesClass of hydroxyl-bearing silicate minerals with a sheet-like structure. They result from aqueous alteration are dominantly serpentine and smectite in meteorites; found in the matrixes of carbonaceous chondrites. Phyllosilicates consist of repeating sequences of sheets of linked tetrahedra (T) and sheets of linked octahedra (O). The T sheet consists of, with a minor amount present in magnetiteFe oxide, Fe2+Fe3+2O4, containing oxidized iron (Fe3+) found in the matrix of carbonaceous chondrites and as diagnostic component in CK chondrites. In CK chondrites, magnetite is typically chromian, containing several wt. % Cr2O3.. It is thought that magnetite was produced by the oxidationOxidation and reduction together are called redox (reduction and oxidation) and generally characterized by the transfer of electrons between chemical species, like molecules, atoms or ions, where one species undergoes oxidation, a loss of electrons,  while another species undergoes reduction, a gain of electrons. This transfer of electrons between reactants of FeS during low-temperature aqueous alteration processes, although some could have a nebular origin (Hyman and Rowe, 1983). Since Boriskino has one of the lowest magnetite contents of any CM chondriteClass of carbonaceous chondrites named after the Mighei meteorite that fell in Ukraine in 1889. They represent samples of incompletely serpentinized primitive asteroids and have experience extremely complex histories. CM meteorites are generally petrologic level type 2 though a few examples of CM1 and CM1/2 also exist. Compared to CI, it probably experienced a relatively moderate degree of parent bodyThe body from which a meteorite or meteoroid was derived prior to its ejection. Some parent bodies were destroyed early in the formation of our Solar System, while others like the asteroid 4-Vesta and Mars are still observable today. alteration.

Fujiya et al. (2016), Verdier-Paoletti et al. (2017), and Vacher et al. (2018) have conducted O- and C-isotope analyses on Ca-carbonates in the CM2 chondritesChondrites are the most common meteorites accounting for ~84% of falls. Chondrites are comprised mostly of Fe- and Mg-bearing silicate minerals (found in both chondrules and fine grained matrix), reduced Fe/Ni metal (found in various states like large blebs, small grains and/or even chondrule rims), and various refractory inclusions (such Nogoyo and/or Boriskino. It was ascertained that low-temperature (~110°C) aqueous alteration processes occurred over an extended time period and precipitated Ca-carbonates of two different types: an earlier Type 1a population consisting of 16O-poor calcite grains, and a more altered Type 2a population consisting of 16O-rich calcite grains derived from an 16O-rich fluid (see top diagram below). Vacher et al. (2018) determined that the Type 2a calcite grains in Boriskino are variably enriched in 13C. It is considered likely that the parent fluid of the Type 2a calcite grains experienced a ~15–50% loss of 13C-poor carbonElement commonly found in meteorites, it occurs in several structural forms (polymorphs). All polymorphs are shown to the left with * indicating that it been found in meteorites and impact structures: a. diamond*; b. graphite*; c. lonsdalite*; d. buckminsterfullerene* (C60); e. C540; f. C70; g. amorphous carbon; h. carbon nanotube*. through its dissolution in methane and subsequent degassing, perhaps during an impact event. This resulted in the wide C-isotope range observed in the Boriskino calcites (see bottom diagram below). O-isotopic values of Type 1 and 2 calcite grains in CM2 Nogoyo 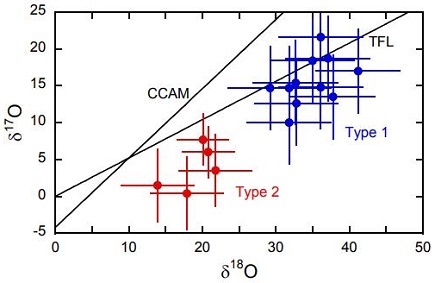 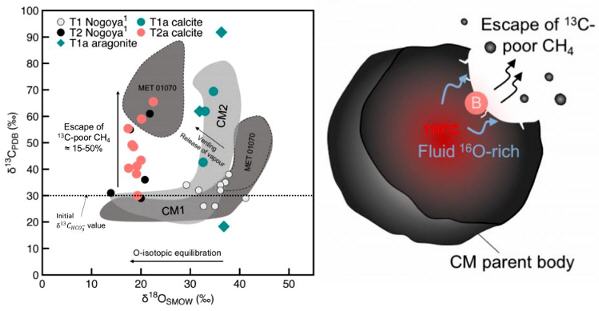