MesosideriteOne of two main types of stony-iron meteorite, the other being pallasites. Mesosiderites are a mixture of approximately 50% basaltic, gabbroic and orthopyroxenitic silicates and 50% Ni-Fe metal and sulfides. The name derives from the Greek "mesos" meaning "middle" or "half" and "sideros" for "iron;" hence "half-iron". The silicates are, group 4B
Found 1956, 12° 20′ N., 122° 52′ E. approx.

After learning of the possible existence of meteoritic iron found on the Bondoc Peninsula on the island of Luzon in the Philippines, Harvey Nininger enlisted the help of a friend who lived in Manilla, John Lednicky, to assist in the recovery of the main massLargest fragment of a meteorite, typically at the time of recovery. Meteorites are commonly cut, sliced or sometimes broken thus reducing the size of the main mass and the resulting largest specimen is called the "largest known mass". from its remote jungle location. After three and a half years of extraordinary effort, the single 888.6 kg mass of Bondoc and several smaller fragments were finally delivered to the American MeteoriteWork in progress. A solid natural object reaching a planet’s surface from interplanetary space. Solid portion of a meteoroid that survives its fall to Earth, or some other body. Meteorites are classified as stony meteorites, iron meteorites, and stony-iron meteorites. These groups are further divided according to their mineralogy and Museum in Sedona. The extraordinary story of the Bondoc meteorite recovery is shared on the website of Jason Utas, which also includes historical and rare photos of the meteorite (see also below for another account of the recovery, courtesy of the Beyer Archive, University of Philippines).

Contained within the stony-iron mass comprising ~11 area% are baseball-sized spheres of iron which contain silicateThe most abundant group of minerals in Earth's crust, the structure of silicates are dominated by the silica tetrahedron, SiO44-, with metal ions occurring between tetrahedra). The mesodesmic bonds of the silicon tetrahedron allow extensive polymerization and silicates are classified according to the amount of linking that occurs between the inclusions on a still smaller scale. A large, metal-free, lenticular, nodule was found, consisting mostly of green pyroxeneA class of silicate (SiO3) minerals that form a solid solution between iron and magnesium and can contain up to 50% calcium. Pyroxenes are important rock forming minerals and critical to understanding igneous processes. For more detailed information, please read the Pyroxene Group article found in the Meteoritics & Classification category. with minor amounts of plagioclaseAlso referred to as the plagioclase feldspar series. Plagioclase is a common rock-forming series of feldspar minerals containing a continuous solid solution of calcium and sodium: (Na1-x,Cax)(Alx+1,Si1-x)Si2O8 where x = 0 to 1. The Ca-rich end-member is called anorthite (pure anorthite has formula: CaAl2Si2O8) and the Na-rich end-member is albite and fine opaques (Garvie et al., 2010). The major-element compositions of the components in this nodule are mostly comparable to those of known diogenitesDiogenites belong to the evolved achondrite HED group that also includes howardites and eucrites. They are named after the Greek philosopher Diogenes of Apollonia, of the 5th century BCE, who was the first to suggest that meteorites come from outer space (a realization forgotten for over 2,000 years). They are, and the nodule has experienced high degrees of metamorphism attested by the coarse grain sizes, 120° triple junctions, and compositional equilibration. The investigating team proposed that this pyroxenite nodule is a fragment from the deep, primitive crustOutermost layer of a differentiated planet, asteroid or moon, usually consisting of silicate rock and extending no more than 10s of km from the surface. The term is also applied to icy bodies, in which case it is composed of ices, frozen gases, and accumulated meteoritic material. On Earth, the of a differentiated parent bodyThe body from which a meteorite or meteoroid was derived prior to its ejection. Some parent bodies were destroyed early in the formation of our Solar System, while others like the asteroid 4-Vesta and Mars are still observable today..

Consistent with other mesosiderites, Bondoc has an Ar–Ar gas retention age of ~3.9 b.y., probably identifying a very slow cooling rate under a thick debris blanket following the collisional disruption and gravitational reassembly of the parent body. Bondoc has a cosmic-ray exposure ageTime interval that a meteoroid was an independent body in space. In other words, the time between when a meteoroid was broken off its parent body and its arrival on Earth as a meteorite - also known simply as the "exposure age." It can be estimated from the observed effects of 166 (±40) m.y.

Based on the metamorphicRocks that have recrystallized in a solid state due to changes in temperature, pressure, and chemical environment. textures of the matrixFine grained primary and silicate-rich material in chondrites that surrounds chondrules, refractory inclusions (like CAIs), breccia clasts and other constituents. silicates, a scheme was developed (Powell, 1971; Floran, 1978) which assigned the mesosiderite group members into one of four textural categories; 1) minimally recrystallized, 2) moderately recrystallized, 3) highly recrystallized, or 4) intergranular melt rock. However, clear differences in bulk composition among these four categories prompted a reinterpretation of this scheme (Hewins, 1984).

Hewins proposed a further division of the least metamorphosed category 1 based on plagioclase abundance: a higher abundance for group 1A (24%) compared to a lower abundance for group 1B (21%). A further division of the more highly metamorphosed categories 2 and 3 was based on whether plagioclase or orthopyroxeneOrthorhombic, low-Ca pyroxene common in chondrites. Its compositional range runs from all Mg-rich enstatite, MgSiO3 to Fe-rich ferrosilite, FeSiO3. These end-members form an almost complete solid solution where Mg2+ substitutes for Fe2+ up to about 90 mol. % and Ca substitutes no more than ~5 mol. % (higher Ca2+ contents occur matrix predominates (groups 2A/3A and 2B/3B, respectively). The more basaltic, plagioclase-rich members of class A are enriched in an anorthitic, cumulateIgneous rock composed of crystals that have grown and accumulated (often by gravitational settling) in a cooling magma chamber. eucrite-like component, while the more ultramaficTerm used for silicate minerals with cations predominantly Mg and/or Fe. Mafic minerals are dominated by plagioclase and pyroxene, and also contain smaller amounts of olivine., orthopyroxene-rich members of class B are enriched in a diogenite-like component. The more plagioclase-rich compositional class A contains a larger diopside component and has a lower Mg# than the orthopyroxene-rich compositional class B.

Through other studies, it was determined that the Ir/Ni ratios (or better still, a plot of Ir/Ni vs. AuThe astronomical unit for length is described as the "mean" distance (average of aphelion and perihelion distances) between the Earth and the Sun. Though most references state the value for 1 AU to be approximately 150 million kilometers, the currently accepted precise value for the AU is 149,597,870.66 km. The/Ni) for matrix metalElement that readily forms cations and has metallic bonds; sometimes said to be similar to a cation in a cloud of electrons. The metals are one of the three groups of elements as distinguished by their ionization and bonding properties, along with the metalloids and nonmetals. A diagonal line drawn of mesosiderites is diagnostic for membership in group A or B, reflecting values of 0.000036 or 0.000051, respectively (Wasson and Rubin, 1985). According to Kong et al. (2008), group B might have assimilated a higher proportion of solidified, weakly fractionated (higher Ir, lower Ni and Au) metal than group A did. Furthermore, the concentrations of Ga and Ge are lower in the metal of category 1 mesosiderites than in that of more highly metamorphosed mesosiderites (Wasson et al., 1974). This is believed to have occurred as a result of reductionOxidation and reduction together are called redox (reduction and oxidation) and generally characterized by the transfer of electrons between chemical species, like molecules, atoms or ions, where one species undergoes oxidation, a loss of electrons,  while another species undergoes reduction, a gain of electrons. This transfer of electrons between reactants from silicates to metal during metamorphism.

Hewins reinterpreted the metamorphic orthopyroxene-rich groups 2B and 3B as having some melt-rock textures and assigned them to a new igneous group 4B, reassigning the previous members of group 4 to 4A. However, this reinterpretation has left groups 2B and 3B unrepresented. More recently, Hewins established a group 2C to accommodate the granular texture and very low plagioclase content (0–5%) of certain paired Antarctic orthopyroxinitic mesosiderites. However, the subsequent identification of igneous clasts in these mesosiderites led to their reassignment to group 4B (for a more in-depth treatment, see R. Hewins, MeteoriticsScience involved in the study of meteorites and related materials. Meteoritics are closely connected to cosmochemistry, mineralogy and geochemistry. A scientist that specializes in meteoritics is called a meteoriticist., vol. 23, 1988).

Bondoc was classified as a member of group 3B under the Floran scheme, and was reclassified as 4B under the Hewins scheme, due to the presence of silicate melt matrices, poikilitic textures, resorbed olivineGroup of silicate minerals, (Mg,Fe)2SiO4, with the compositional endpoints of forsterite (Mg2SiO4) and fayalite (Fe2SiO4). Olivine is commonly found in all chondrites within both the matrix and chondrules, achondrites including most primitive achondrites and some evolved achondrites, in pallasites as large yellow-green crystals (brown when terrestrialized), in the silicate portion grains, and in light of its crystallizationPhysical or chemical process or action that results in the formation of regularly-shaped, -sized, and -patterned solid forms known as crystals. sequence. This melt rock formed as an impact melt into which cold clasts were mixed. The specimens shown above are an 8.3 g partial slice (left) and a 32.6 g slice from a golf ball-sized, silicated iron nodule (right).

History of the Discovery of the Mulanay Meteorite (Bondoc Peninsula): Courtesy of the University of Philippines, Beyer Archive 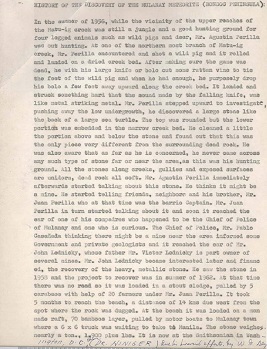