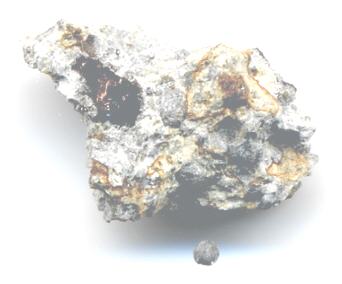 Fell March 12, 1899
60° 20.42′ N., 25° 42.30′ E., approx. At 10:30 in the evening, a highly friable stone meteoriteWork in progress. A solid natural object reaching a planet’s surface from interplanetary space. Solid portion of a meteoroid that survives its fall to Earth, or some other body. Meteorites are classified as stony meteorites, iron meteorites, and stony-iron meteorites. These groups are further divided according to their mineralogy and fell through thick sea-ice near the NW shore of Bjurbölemalmen Cape in southern Finland (Moilanen and Kettunen, 2016). The meteorite broke into many fragments lying beneath 8 m of mud and clay sediments, which delayed recovery of the first fragments for a month. Over 328 kg were ultimately recovered, and a laboratory analysis determined the classification for the meteorite to be an L4 ordinary chondriteWork in Progress Ordinary chondrites (OCs) are the largest meteorite clan, comprising approximately 87% of the global collection and 78% of all falls (Meteoritical Society database 2018)1. Meteorites & the Early Solar System: page 581 section 6.1 OC of type 5 or 6 with an apparent shock stage of S1,. Further studies of Bjurböle have resulted in a revision of this classification, and it is now recognized as a member of the L/LL4 transitional group. The extrememly low crushing strength implies a crystallizationPhysical or chemical process or action that results in the formation of regularly-shaped, -sized, and -patterned solid forms known as crystals. at low pressures and/or within a small parent bodyThe body from which a meteorite or meteoroid was derived prior to its ejection. Some parent bodies were destroyed early in the formation of our Solar System, while others like the asteroid 4-Vesta and Mars are still observable today..

Diagram credit: M. Szurgot, 47th LPSC, #2180 (2016)
Amean based on chemical composition (Eq. 1), Fe/Si atomic ratio (Eq. 2), and grain density (Eq. 3) Other members of this intermediate chondriteChondrites are the most common meteorites accounting for ~84% of falls. Chondrites are comprised mostly of Fe- and Mg-bearing silicate minerals (found in both chondrules and fine grained matrix), reduced Fe/Ni metal (found in various states like large blebs, small grains and/or even chondrule rims), and various refractory inclusions (such group include L/LL3 Esperance, L/LL4 Seemore Downs 001 and Cynthiana, L/LL5/6 Sahara 97021, L/LL6 Acfer 041, and several others. A few meteorites are only partially resolved into this intermediate group, including L/LL3 Inman, L/LL5 Knyahinya and Qidong, and L/LL6 Holbrook and Sultanpur. The specimen of Bjurböle shown above is a 0.2 g micromount with a small detached chondrule.