The Consummation of a New Iron Group—IIG The five iron meteorites displayed on this page, which constitute the newly designated group IIG, sharing the charateristics of low-Ni, high-P hexahedrites, are presented here courtesy of the Dr. J. Piatek Collection. 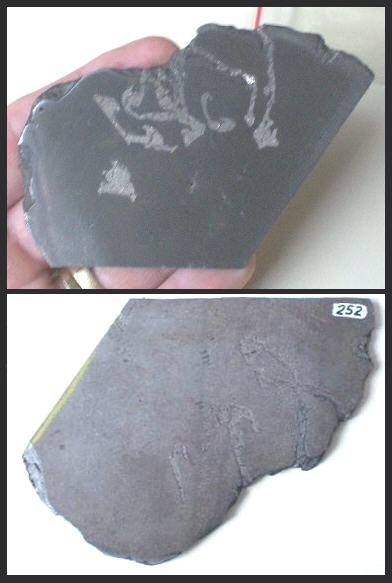 An iron mass was found in 1859 in western Alabama, USA, followed in subsequent years by the recovery of five additional masses; these six iron masses had a combined weight of 43.8 kg. In 1867, an extensively oxidizedOxidation and reduction together are called redox (reduction and oxidation) and generally characterized by the transfer of electrons between chemical species, like molecules, atoms or ions, where one species undergoes oxidation, a loss of electrons,  while another species undergoes reduction, a gain of electrons. This transfer of electrons between reactants 3.63 kg mass was plowed up 250 km east of the Tombigbee River findMeteorite not seen to fall, but recovered at some later date. For example, many finds from Antarctica fell 10,000 to 700,000 years ago.. The meteoriteWork in progress. A solid natural object reaching a planet’s surface from interplanetary space. Solid portion of a meteoroid that survives its fall to Earth, or some other body. Meteorites are classified as stony meteorites, iron meteorites, and stony-iron meteorites. These groups are further divided according to their mineralogy and was given the name Auburn, and although historically considered to be a transported piece of Tombigbee River, it was demonstrated by Hilton and Walker (2019) that it is likely a separate iron belonging to the IIAB group. Tombigbee River was initially classified as an ungroupedModifying term used to describe meteorites that are mineralogically and/or chemically unique and defy classification into the group or sub-group they most closely resemble. Some examples include Ungrouped Achondrite (achondrite-ung), Ungrouped Chondrite (chondrite-ung), Ungrouped Iron (iron-ung), and Ungrouped Carbonaceous (C-ung). iron, but since it was shown to have similar compositions to two later found iron meteorites, La Primitiva and Bellsbank, these three meteorites became known as the Bellsbank Trio. The photo above shows a 117.2 g slice of this rare fallMeteorite seen to fall. Such meteorites are usually collected soon after falling and are not affected by terrestrial weathering (Weathering = 0). Beginning in 2014 (date needs confirmation), the NomComm adopted the use of the terms "probable fall" and "confirmed fall" to provide better insight into the meteorite's history. If, acquired from the United States National Museum, Smithsonian Institution by Dr. J. Piatek. > read more 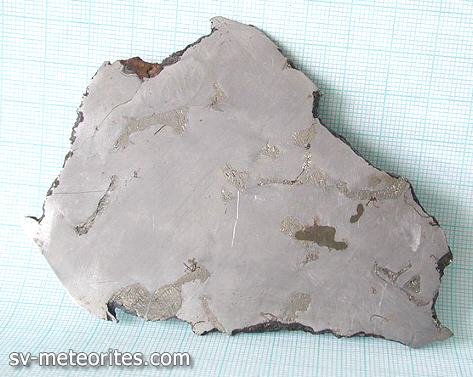 Between 1888 and 1911, six iron masses weighing together 27.4 kg were found in and around the nitrate plants in the Tarapaca Region of Chile. The photo above shows a 74 g partial slice, acquired from Sergey Vasiliev—SV Meteorites by Dr. J. Piatek.

A 38 kg iron mass was found just below the surface in Cape Province, South Africa, in 1955. The photo above shows a 22.2 g partial slice, acquired from the United States National Museum, Smithsonian Institution by Dr. J. Piatek. 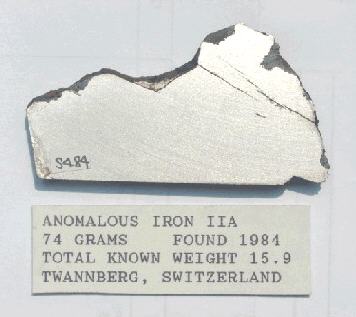 A 15.91 kg iron was found in May 1984 by M. Christen in a field on Twann Mt. (Twannberg), Switzerland, in association with glacial tillAn unconsolidated, poorly sorted sediment deposited by glaciers.   Till contains rock and mineral fragments of all sizes from clay-size particles to massive boulders. transported by the Rhône glacier during the last ice age (Hofmann et al., 2009). A 2.2 kg paired mass was discovered by M. Jost in the attic of an old house in the village of Twann in January 2000. In 2005, a third mass was discovered as part of a rock collection in the Natural History Museum Bern, which previously belonged to the Schwab Museum, and which was incorrectly labeled as hematiteFe-oxide mineral (Fe2O3) that may be the major cause of the red color on Mars. Coarser-grained gray hematite has the same chemical formula as the red variety, but a different crystalline structure. Deposits of gray hematite found in the Terra Meridiani region of Mars may suggest that water once circulated. In 2007 three more paired masses were found in the Twannbach canyon, and more recently many other transported masses were recovered near Twannbach River and Gruebmatt. Beginning in 2015, numerous masses have been recovered at Mont Sujet plateau. These are non-transported masses in their original fall location, delimiting a strewn fieldArea on the surface containing meteorites and fragments from a single fall. Also applied to the area covered by tektites, which are produced by large meteorite impacts. Strewnfields are often oval-shaped with the largest specimens found at one end. Given that the largest specimens go the greatest distance, a meteoroid's of over 4.5 km in a direction ENE to WSW (Hofmann et al., 2016). These recent recoveries raise the TKW to ~70 kg in ~550 individual pieces (Smith et al., 2016). The present total recovered weight is in stark contrast to the estimated ~30 million kg mass of a 20-m-diameter meteoroidSmall rocky or metallic object in orbit around the Sun (or another star). calculated to have fallen 165 (±58) t.y. ago (Smith et al., 2016). With the discovery of Twannberg and its observed genetic relationship with the three irons presented above, the iron grouplet became known as the Bellsbank Quartet. The photo above shows a 74 g slice from the first discovered mass, acquired from the Jim Schwade Collection by Dr. J. Piatek. 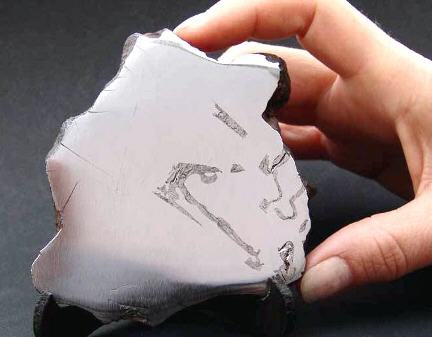 A single 13.1 kg iron meteoriteMeteorite composed mainly of iron (Fe) and nickel (Ni) in the form of two alloys, kamacite and taenite. Due to their metallic makeup and extraordinary weight, iron meteorites are easily distinguished from ordinary rocks. Also, because they rarely break up in the air and suffer much less from the effects was found in Antofagasta, Chile in 2000. Guanaco became the requisite fifth recognized member of this Ni-poor (4.3%), schreibersite-rich iron group (the Bellsbank Quintet), and therefore, John T. Wasson has proposed that this new group be given the designation IIG. Shown in the photo above is a 310 g slice acquired from Rodrigo Martinez—Atacama Desert Meteorites by Dr. J. Piatek. > read more