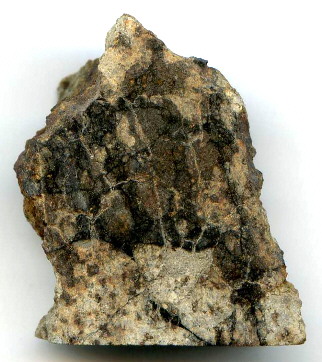 Found 1924
38° 32′ N., 100° 13′ W. This brecciated meteoriteWork in progress. A solid natural object reaching a planet’s surface from interplanetary space. Solid portion of a meteoroid that survives its fall to Earth, or some other body. Meteorites are classified as stony meteorites, iron meteorites, and stony-iron meteorites. These groups are further divided according to their mineralogy and was plowed up in Ness County, Kansas and has undergone considerable terrestrial weathering. The 21-pound Kansada stone of 1894 might be another mass of this meteorite. Beeler has been shocked to stage S4 and contains shock veins and melt pockets. The total known weight is 8.64 kg.

In a study of the thermal history of the LL6 Saint-Séverin, Min et al. (2013) determined the closure temperatures for pristine phosphate grains. The results of this study, along with Pb–Pb and Ar–Ar data, led them to conclude that this LL-group meteorite cooled at a slower rate (2.6°C/m.y.) compared to meteorites from the H chondriteOrdinary chondrites with a high content of free Ni-Fe metal (15-19 vol. %) and attracted easily to a magnet. Their main minerals are olivine (Fa16-20) and the orthopyroxene bronzite (Fs14.5-18.5), earning them their older name of bronzite chondrites. Chondrules average ~0.3 mm in diameter. Comparison of the reflectance spectra of parent bodyThe body from which a meteorite or meteoroid was derived prior to its ejection. Some parent bodies were destroyed early in the formation of our Solar System, while others like the asteroid 4-Vesta and Mars are still observable today. (~200 km-diameter) during their late cooling phase, possibly reflecting a comparably larger size for the LL parent body. However, a similar cooling history study conducted on H-group chondritesChondrites are the most common meteorites accounting for ~84% of falls. Chondrites are comprised mostly of Fe- and Mg-bearing silicate minerals (found in both chondrules and fine grained matrix), reduced Fe/Ni metal (found in various states like large blebs, small grains and/or even chondrule rims), and various refractory inclusions (such by Ganguly et al. (2013) led them to the conclusion that the H-chondrite parent body likely experienced a collisional disruption and re-accretion rather than a consistently slow cooling like that associated with an ‘onion-shell’ model. Studies of the orbits of two other LL6 ordinary chondrites, Bensour and Kilabo, conducted by Alexeev et al. (2009), suggest that these meteorites cross the orbitThe elliptical path of one body around another, typically the path of a small body around a much larger body. However, depending on the mass distribution of the objects, they may rotate around an empty spot in space • The Moon orbits around the Earth. • The Earth orbits around of the ~7 km-diameter asteroid 3628 Božněmcová, located in the inner asteroid beltBelt located between 2.12 and 3.3 AU from the Sun and located between the orbits of Mars and Jupiter containing the vast majority of asteroids. The asteroid belt is also termed the main asteroid belt or main belt to distinguish it from other asteroid populations in the Solar System such (~2.2 AUThe astronomical unit for length is described as the "mean" distance (average of aphelion and perihelion distances) between the Earth and the Sun. Though most references state the value for 1 AU to be approximately 150 million kilometers, the currently accepted precise value for the AU is 149,597,870.66 km. The) which is associated with two efficient resonances. The above specimen is a 9.1 g partial slice.