Ureilite
Monomict/Unbrecciated
Olivine–augiteHigh-Ca clinopyroxene, (Ca,Mg,Fe)SiO3, that occurs in many igneous rocks, particularly those of basaltic composition. In order to be considered augite, the clinopyroxene must contain 20 to 45 mol % of calcium (Wo20 - 45). An important and unique Martian meteorite is NWA 8159, that has been classified as an augite basalt., plagioclase-bearing 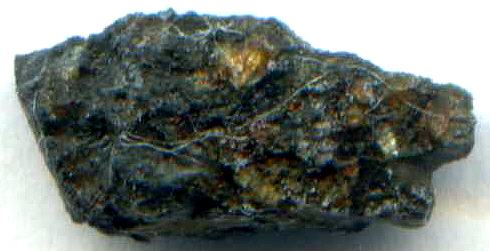 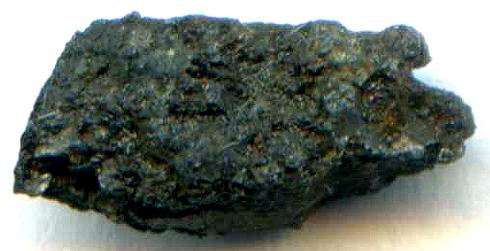 Fell October 7, 2008
20° 43.04′ N., 32° 30.58′ E. In 2008, October 6 at 5:46 A.M., asteroid 2008 TC3 fell to Earth in northern Sudan. See the Almahata Sitta webpage for the complete story of the discovery of this meteoriteWork in progress. A solid natural object reaching a planet’s surface from interplanetary space. Solid portion of a meteoroid that survives its fall to Earth, or some other body. Meteorites are classified as stony meteorites, iron meteorites, and stony-iron meteorites. These groups are further divided according to their mineralogy and, results of the consortium analyses, and new models for the petrogenetic history of the ureilite parent bodyThe body from which a meteorite or meteoroid was derived prior to its ejection. Some parent bodies were destroyed early in the formation of our Solar System, while others like the asteroid 4-Vesta and Mars are still observable today.. The 2008 TC3 meteorite was sent to NASA’s Johnson Space Center in Houston (Zolensky) and Carnegie Institution of Washington (Steele) for analysis and classification, and Alamahta Sitta was determined to be a polymict ureilite fragmental brecciaWork in Progress ... A rock that is a mechanical mixture of different minerals and/or rock fragments (clasts). A breccia may also be distinguished by the origin of its clasts: (monomict breccia: monogenetic or monolithologic, and polymict breccia: polygenetic or polylithologic). The proportions of these fragments within the unbrecciated material composed of three main ureilite lithologies, along with a wide range of xenolithic clasts representing many different chondritic and achondritic lithologies in an assemblage similar to the polymict brecciaGeneral term for all breccias that are neither monomict nor dimict. Modified from image source: http://www.saharamet.com/meteorite/gallery/HED/index.html. Kaidun (Bischoff et al., 2010). Results of the analyses indicate that all of the clasts came from the Almahata Sitta fallMeteorite seen to fall. Such meteorites are usually collected soon after falling and are not affected by terrestrial weathering (Weathering = 0). Beginning in 2014 (date needs confirmation), the NomComm adopted the use of the terms "probable fall" and "confirmed fall" to provide better insight into the meteorite's history. If; e.g., detection of short-lived cosmogenic nuclides, very low weathering grade (W0–W0/1), multiple lithologies among fragments delimiting a strewn fieldArea on the surface containing meteorites and fragments from a single fall. Also applied to the area covered by tektites, which are produced by large meteorite impacts. Strewnfields are often oval-shaped with the largest specimens found at one end. Given that the largest specimens go the greatest distance, a meteoroid's, a high number of rare E-chondriteType of meteorite high in the mineral enstatite and also referred to as E-chondrites. Although they contain substantial amounts of Fe, it is in the form of Ni-Fe metal or sulfide rather than as oxides in silicates. Their highly reduced nature indicates that they formed in an area of the rock types found together, diffusionMovement of particles from higher chemical potential to lower chemical potential (chemical potential can in most cases of diffusion be represented by a change in concentration). Diffusion, the spontaneous spreading of matter (particles), heat, or momentum, is one type of transport phenomena. Because diffusion is thermally activated, coefficients for diffusion of PAHs among clasts (Sabbah et al., 2010), and the finding of new and unique meteorite fragments within a small area.

Special thanks to Siegfried Haberer and Stephan Decker for providing specimens of this special meteorite and many of its xenolithic inclusions to the scientific and collector communities. The photo of MS-MU-012 shown above is a 0.14 g partial slice, while the photo below shows the main massLargest fragment of a meteorite, typically at the time of recovery. Meteorites are commonly cut, sliced or sometimes broken thus reducing the size of the main mass and the resulting largest specimen is called the "largest known mass".. 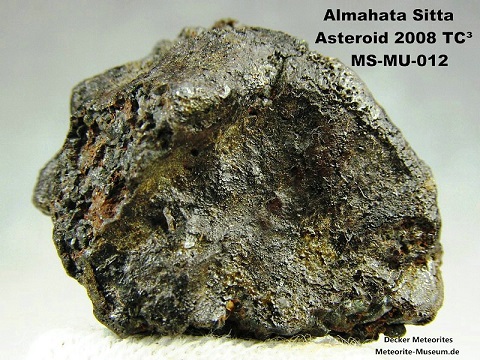